Chicago Public Square is a labor of … oh, let’s say … love. But it costs money and time to create. Readers like Lisa Krimen, Catherine Johns, Mark Wukas and Anthony Caciopo help keep it coming. You can, too, for as little as $5 or $10 a month—or more, if you truly can’t live without this thing. And now the news: 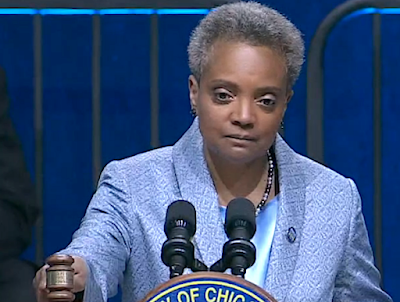 Mayor Lightfoot. As of today—right around Square’s email dispatch deadline—it’s just plain Mayor (no “‑elect”) Lori Lightfoot.
■ See her inauguration.
■ Politico: An all-female team of movers was to bring Lightfoot’s stuff into her new office.
■ She’s not completely cleaning Rahm Emanuel’s administrative house …
■ … but she will get a historically different City Council.

Jewish security boost. After what apparently was an arson attempt at a Chicago synagogue over the weekend, police are stepping up their presence around the city’s Jewish institutions.
■ Surveillance video shows a suspect.

Chicago measles. Chicago, which has one of the country’s highest vaccination rates, has nevertheless now confirmed its first case in the nation’s ongoing outbreak of measles—the state’s eighth this year.
■ The Centers for Disease Control and Prevention lists measles’ signs and symptoms. 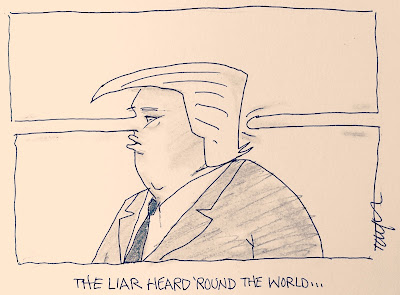 ‘Trump lies about everything and for every reason.’ But, Charles M. Blow counsels in The New York Times, “take his moments of desperation as proof that the world has not completely gone mad.”
■ In last night’s Fox News town hall, Democratic presidential candidate Pete Buttigieg called Trump’s tweets “grotesque things.”
■ The (one) Republican congressman calling for Trump’s impeachment now faces a primary challenge.
■ The Times’ Peter Baker: Trump’s “is the profanity presidency, full of four-letter denunciations of his enemies.” (Cartoon: Keith J. Taylor.)
■ One of seven signs you may be smart: You like to swear.
■ An ex-RedEye reporter has written a new book of 100 Very Short Stories of Dangerous Relationships, Impaired Presidents, Frustrating Jobs and More.

Trump’s three abortion exceptions. Calling himself “strongly Pro-Life,” President Trump is nevertheless distancing himself from regressive anti-abortion laws like Alabama’s.
■ Neil Steinberg in the Sun-Times: “This is about faith-based intolerance. Not babies. Not respect for life. Not heartbeats.”
■ Mother Jones: “Gerrymandering and voter suppression paved the way for abortion bans.”

‘Pay women fairly or pay the price.’ Presidential candidate and California Sen. Kamala Harris has a plan to lower the boom on companies that pay men more than women.
■ A Sun-Times editorial calls for Illinois to outlaw companies’ practice of charging more for auto insurance just because the customer is a woman—even one with a spotless driving record.
■ The paper’s investigation found auto insurance rates around Chicago inflated for reasons unrelated to one’s driving record.
■ Nevada now has the nation’s first majority-female legislature … and things are different.

‘Refusals should be glaring, red flags.’ A Tribune editorial calls on the Illinois Department of Children and Family Services to stop giving a pass to families that provoke repeated complaints of child neglect yet who refuse help.
■ Funeral services have been set for a teen mother lured to a home and murdered, her baby cut from her womb.