‘Jaw-dropping.’ Politico’s Shia Kapos spotlights some of the highlights in the charges against indicted Chicago Ald. Ed Burke … 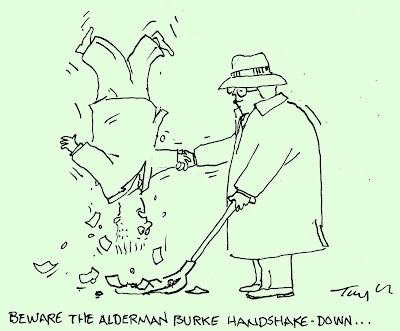 ■ … which include an allegation that he used city government itself as a criminal “enterprise” …
■ … and that he tried to extort the Field Museum into hiring a friend’s relative.
■ A Sun-Times editorial: “Burke has been charged with racketeering, like a mobster.” (Cartoon: Keith J. Taylor.)

‘Burke can no longer continue to do his job.’ Mayor Lightfoot is calling on him to quit …
■ … and she elaborated this morning in a news conference you can see here—promising to protect city employees who do the right thing to blow whistles on scams like those of which Burke is accused.
■ The indictment puts fresh urgency behind a new city Board of Ethics proposal to impose tough limits on campaign contributions from “big-money players”—including labor unions and developers—and to crack down on nepotism and outside jobs.
■ The Appeal: Mayor Lightfoot “should take a dollar from the [police] department’s budget for every dollar the city spends settling with its victims.”

Foot down. Lightfoot’s opposition to an expanded Chicago restaurant tax to pay for a McCormick Place overhaul may have killed the notion—for now.
■ Lawmakers are considering a proposal that would take at least some of the politics out of roadbuilding. 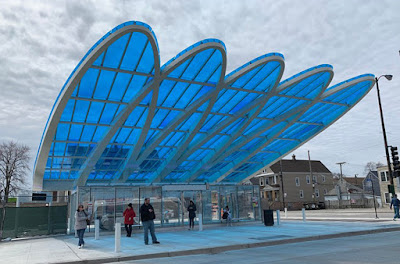 Blue Line blues. A fancy and colorful architectural feature at the CTA’s Belmont Station has sprung leaks less than two months after its inauguration. (Photo: Walsh Construction.)
■ Chicago’s signed a deal with acclaimed architect Jeanne Gang’s team to design a huge O’Hare expansion.
■ On the block: A 21.5-acre industrial scrapyard along the Chicago River could be the next front in the city’s development wars.

‘No president is above the law.’ Presidential candidate Elizabeth Warren has a plan to make that a principle of U.S. government.
■ A Twitter exchange between Democratic Rep. Alexandria Ocasio-Cortez and Republican Sen. Ted Cruz raises hopes for the revival of bipartisanship.

‘Half the children in Illinois are on Medicaid.’ And NPR Illinois says their access to mental health care is in critical condition.
■ Steve Rhodes in The Beachwood Reporter: “We ration health care in this country—to those who can afford it. And the more you can afford, the better care you get. It’s that simple. And that immoral.”

Why the hell not? In the aftermath of a little girl’s serious injury by a foul ball at a Cubs-Astros game this week, the Tribune’s Phil Rosenthal and Tim Bannon explain why Major League Baseball doesn’t do more to protect fans.
■ The Cubs player who hit the ball: “I want to put a net around the whole stadium” …
■ … and: “God willing, I’ll be able to have a relationship with this little girl for the rest of my life.”

They broke the National Spelling Bee. Eight kids survived so many playoff rounds last night that administrators gave up and declared an unprecedented eight-way tie.
■ Naperville native James Holzhauer’s 31st win brought him within $150,000 of the all-time record haul for regular-play winnings on Jeopardy!

‘A colossal mess.’ Rivet’s Rob LaFrentz stomps on Godzilla: King of the Monsters …
■ … which the Trib’s Michael Phillips says “can be accused of overkill. Then again, there’s so much to kill!”
■ The Onion: “Rocketman Viewers Not Sure Movie Really Needed 45-Minute Princess Diana Death Scene.”

That’s the average amount Chicago Public Square supporters—people like Jeffrey Langer, Tom Barnes, Richard Milne and JoBeth Halpin—chip in each month to keep this service coming your way. Can you contribute $5?
■ Thanks to reader Pam Spiegel for some editorial housecleaning on this post.