Hot spot. A report in the scientific journal The Lancet Infectious Diseases nails Cook County as the most likely to suffer the next big measles outbreak—and one larger than elsewhere—partly because of those two major airports. 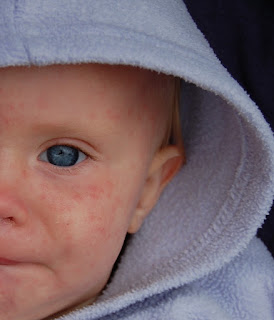 ■ WBEZ: Illinois ran up big bills with a vaccine program for poor kids.
■ Wisconsin is among the states with the highest rates of vaccine exemptions for religious and philosophical reasons.
■ A Baylor College medical prof warns America’s “antivax monster” has three heads. (Photo: Dave Haygarth.)
■ Over America’s history, vaccine resistance has coincided with periods of government mistrust …
■ … witness the Anti-Compulsory Vaccination Hymn from the 1800s.
■ Which adults need measles shots?

Wet spot. Only places hit by hurricanes have suffered more flooding than the Chicago area over the last decade, according to a Tribune analysis.
■ From 2013: Chicago flooding triggered geysers of human waste bursting from manholes. 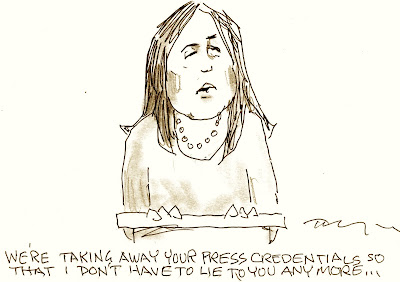 ‘A farce.’ Politico’s Jack Shafer says that, under the Trump administration’s latest crackdown on journalists’ White House access, presidential press secretary Sarah Huckabee Sanders “should have to give up her White House credentials, too.”
■ The new rules could theoretically disqualify almost the whole White House press corps. (Cartoon: Keith Taylor.)■ The Daily Beast: “Shocker! The GoFundMe Campaign to Build the Wall Is a Bust.”
■ Snopes fact-check: “Was U.S. Rep. Ocasio-Cortez ‘Scared’ by Her Garbage Disposal?” (TL;DR: Yes.)

Attempted murder. Police have charged the teen parents of a newborn brought to a Chicago firehouse Tuesday afternoon.
■ In a speech to the City Club, Chicago Police Supt. Eddie Johnson says he’s working on a plan to discourage kids from making mischief downtown.
■ Cook County reports that, even though it’s cut its jail population by close to half since 2013, violent crime didn’t jump.

‘He definitely suffers amnesia.’ A Trib editorial slams The New York Times for publishing a column in which Mayor Emanuel “spins furiously to his favor” on police reforms.
■ The Beachwood Reporter’s Steve Rhodes: “Apparently I’ve been living under a delusion my entire life about what journalism is, and how newspapers should behave. I need to be re-educated, because the … Times is obviously smarter about this than I am.”

‘None of this makes the country any safer.’ Neil Steinberg reports on his experience signing up for Illinois’ “new super duper driver’s license, the ‘REAL ID.’”
■ Proposed legislation would charge Illinois owners of electric-powered vehicles $1,000 a year—because they don’t pay gas taxes.
■ The Chicago edition of the World Naked Bike Ride (“Bare-as-you-dare,” “Less gas, more ass”) is less than a month away.

They were warned. The mother of a student at a Denver-area school where a shooting this week left one student dead and eight others hurt says she told a school board member in December that academic pressure and sleepless students were part of a “perfect storm” for “for something like a Columbine.”
■ “Hero students” exemplify a shift in worst-case scenario strategies for school shootings.

If your mom’s been brainwashed by ‘fake news’ … she needs a Mother’s Day gift of Chicago Public Square.
■ Consumer Reports: Best gifts for graduates.

Thanks … to readers Mike Braden and Pam Spiegel for proofreading notes on this edition.
Email ThisBlogThis!Share to TwitterShare to FacebookShare to Pinterest
← Newer Post Older Post → Home