‘Disgusting.’ A former Sun-Times and Tribune editor condemns President Trump’s pardon of the criminal who owned the Sun-Times for a decade …
■ … and who just coincidentally happens to have written a spectacularly suck-uppy biography of Trump last year. 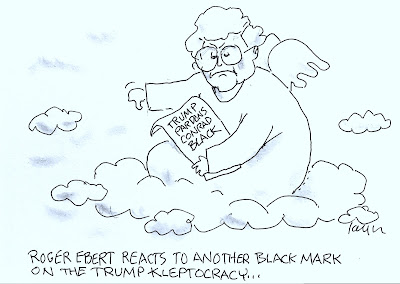 Trump’s towering trouble. The president’s company says its Chicago hotel—[clarifying] which Black partnered with Trump to build built on the site of the old Sun-Times building that Black partnered with Trump to build—is suffering, and it blames “the perceived threat of gun violence” …
■ … even though the company’s own figures show its competitors here haven’t suffered the same decline.
■ Washington Post media columnist Margaret Sullivan says reporters should stop repeating Trump’s derogatory nicknames for his challengers.
■ Facebook says it’s cracked an Israel-based campaign to disrupt foreign elections.

Crisis? What crisis? Eleven experts explain for Vox how to tell if we’re in a constitutional crisis.
■ The owner of three Florida Panhandle FM stations says they’ll be airing snippets of last week’s Trump Florida speech for two minutes every hour until Election Day 2020.

Facebook murder link. Police say a pregnant woman was strangled and her baby was cut from her womb after she went to a Chicago home in response to a Facebook offer of free baby clothes.
■ A judge has told the teenage father of a newborn abandoned in a Chicago alley he hopes “this will not define your life.” 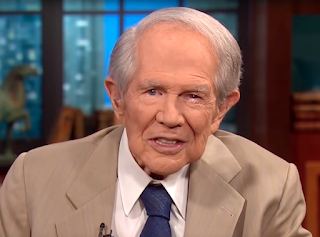 Even Pat Robertson … The reactionary televangelist and 700 Club host says even he thinks Alabama’s near-total ban on abortion “has gone too far.”
■ Slate’s Dahlia Lithwick on the wave of draconian new anti-abortion laws: The Supreme Court “was all teed up to quietly gut America’s abortion rights. Then Alabama happened.”
■ Next up: Missouri is moving toward a ban on abortions after eight weeks of pregnancy.
■ Tribune columnist Steve Chapman: “Republicans have used abortion to succeed at the polls because, for so long, they couldn’t get their way. Once they get their way, the tide is likely to turn.”
■ The number of births in the United States last year hit a 32-year low, and the overall fertility rate is at a record low.
■ The Onion: “Abused 12-Year-Old Alabama Girl Doesn’t Think She Can Handle Being A Mom On Top Of Everything Else.”

Not-so-fab four. Eight percent of Chicago’s aldermen are now out on bond.
■ A Sun-Times editorial cheers on Mayor-elect Lightfoot’s moves to rein in aldermanic power: “The Chicago City Council blew its chance to be treated like responsible adults a long time ago.”

SAT asterisks. The College Board is planning to assign an “adversity score” to every student who takes its college admission tests, reflecting more than a dozen factors—including the neighborhood crime rate, family income and their school’s academic rigor.
■ The Wall Street Journal broke the story.

Taste of Chicago headliners. The city’s revealed the musical acts that’ll highlight this summer’s edition of its annual food fest.
■ Lawn spots are free. Actual seats will cost you—but you can save $5 if you buy before June 1.
■ The Rolling Stones’ tour is back on—and it’ll start in Chicago next month.
■ Hamilton is finally winding up its shot in Chicago—early next year.

Hail of a rush hour. This afternoon’s weather in Chicago could bring 60 mph winds and hail the size of golf balls.
■ Presidential candidate and Washington Gov. Jay Inslee has a $9 trillion plan to fix the climate.
■ Candidate and U.S. Sen. Elizabeth Warren wants to jam the revolving door between the Pentagon and the private defense industry.

Thanks …
■ … to readers whose support keeps Chicago Public Square coming to the rest o’ ya for free. Unless, of course, you care to join them by kicking in a few cents a day to help this thing grow. Which would be cool.
■ … and to Mike Braden, who helped clarify the Trump Tower item above.