If you’re reading Chicago Public Square for free, please consider joining those who make that possible—by pledging a few cents per issue as a Square supporter. And now, on with the news:

Oval orifice. The broadcast networks have agreed to air President Trump’s first Oval Office address to the nation tonight—to talk about immigration, the wall and the shutdown …
■ … and maybe declare a national emergency …
■ … but the decision is sparking fierce debate inside and outside the media …
■ … especially in light of the networks’ 2014 refusal to air an Obama speech about immigration.
■ David Leonhardt in The New York Times: “If the networks had refused to carry the speech live, “the issue would be a fight between Trump and the media as much as it would be about the government shutdown or immigration policy.”
■ Seth Meyers on NBC’s Late Night: “If he insists on speaking in primetime, make him do it as a contestant on The Masked Singer.”
■ Stephen Colbert on Twitter: “My network will be carrying Trump’s Wall speech live. So … tune into CBS to See B.S.”

Chicagoans paying the price. Tens of thousands of federal employees in the region will get partial paychecks this week—but may get nothing in two weeks.
■ Illinois Sen. Tammy Duckworth predicts “long, long lines as the TSA is shortstaffed” at airports if the shutdown drags on.
■ Across the country, the shutdown is crippling affordable housing programs “a lot earlier than we thought.”
■ A Trump supporter: “He’s not hurting the people he needs to be hurting.”

‘A massive chasm.’ A WBEZ analysis finds Chicago’s draconian method of collecting on parking tickets has allowed the city to seize and sell almost 50,000 cars since 2011.
■ An alderman says plans for a soccer stadium in the proposed Lincoln Yards development on Chicago’s North Side are dead. 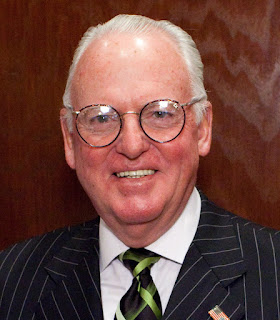 Sure, now. With powerful Chicago Ald. Ed Burke facing corruption charges, Sun-Times City Hall reporter Fran Spielman says the joint was crawling Monday with political candidates holding news conferences: “The second floor lobby … was like the supermarket deli counter on a Saturday morning. Take a number and wait your turn to step up and propose ethics reforms” …
■ … including a call to ban outside jobs for aldermen.
■ A Tribune editorial: Mayor Emanuel “ignored, and at times ridiculed, efforts to shine a light” on Burke’s clout.
■ Burke’s finally losing his costly police bodyguards.
■ The Chicago Reporter asks: Who hasn’t gotten cash from Burke? (2011 photo: Brian Crawford—in the Chicago Public Square Flickr group he created.)

Suburban cookie crumbling. The company that makes Oreos—Mondelez—is leaving its Deerfield HQ to move about 400 jobs to Chicago’s Fulton Market neighborhood in 2020.
■ Why the suburb of Wheaton keeps making those “best places” lists.
■ An alderman calls Marshall’s decision to close two Chicago stores “devastating.”
■ Musician and Northwestern University journalism professor (and occasional Square kibitzer) Rich Gordon asks why the board of the Old Town School of Folk Music chose to “reward the school’s top administrators with substantial raises when enrollment was falling.”

From the suburbs to SNL. The Marvelous Mrs. Maisel star and Highland Park High School grad Rachel Brosnahan hosts Saturday Night Live next week Jan. 19.
■ Debuting on the History channel tonight: A TV series dramatizing the UFO research of a man who became chairman of Northwestern University’s astronomy department.
■ The University of Chicago’s first female faculty member in physical sciences—a woman who later became known as the “Mother of Hubble” for her role in the Hubble Space Telescope program—is dead at 93.

Windy city. Brace yourself for Chicago-area blasts of up to 50 miles per hour into this evening.
■ Just as scientists warn now is the time to cut back, U.S. greenhouse gas emissions spiked last year.
■ Read the report.

Correction. Ineffable Square reader Mike Braden—seriously, don’t even think about effing him—suggested the phrase “a group of young entrepreneurs” in yesterday’s edition properly should have taken the verb wants, not want. Striking “a group of” and just beginning the sentence “Young entrepreneurs want …” made it better.
■ Honoring those who spot errors is a time-honored tradition for your Square publisher—as you’ll learn about two-thirds of the way into this 2004 Trib article.
■ So write anytime.