Madigan bugged. Illinois House Speaker Michael Madigan was secretly recorded, the Sun-Times reports, as he tried to win business for his private law firm from a developer brought to him by Ald. Danny Solis …
■ … who, a federal affidavit contends, “received sex acts, Viagra, free weekend use of an Indiana farm once owned by Oprah Winfrey and a steady stream of campaign contributions in exchange for shepherding official City Council actions.”
■ Solis reportedly “hopes to someday be hailed as a hero.”
■ Meanwhile, a candidate for alderman—and self-described “day-one Trump supporter”—is suing Madigan, complaining of fraud and intimidation.
■ A Sun-Times editorial calls out 21 “weasel” aldermen seeking reelection. 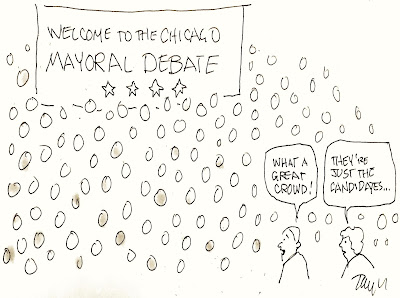 ‘It’s the only general election in the country that is held in February. And we all know why that is.’ Chicago mayoral candidate Garry McCarthy says the city’s municipal election date is designed to “get low voter turnout and this way you can swing the election.”
■ Cubs owner Tom Ricketts is backing this guy in the race. (Cartoon: Keith Taylor.)
■ The Chicago Public Square voter guide for Chicago’s election is here for ya.

Chillinois, Windiana. The regional National Weather Service office is using those nicknames as shorthand for the record-threatening weather throttling the Midwest.
■ The coldest weather here in a generation threatens 72 hours of subzero wind chills.
■ Hospitals are bracing for the worst.
■ Cold weather survival tips: “Don’t go out drinking where you might not be very rational about what you are going to be doing when you walk out of wherever you are at.”

What’s closed—or closing. The roster of schools, universities, courts, museums and zoos closing over the next few days is growing.
■ The Emergency Closing Center offers a searchable list for organizations of all sizes shutting down.
■ Business shutdowns will hurt hourly workers the most.
■ The polar vortex is 4.5 billion years old.
■ A climate scientist: “These events … help the public understand some of the ‘interesting’ ways that climate change will unfold” …
■ … but President Trump considers it a laughing matter. 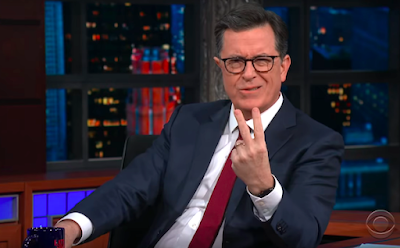 Colbert: Trump’s ‘enemy.’ Promoting his tell-all account, ex-Trump aide Cliff Sims told Stephen Colbert last night that Colbert placed No. 2 on an enemies list Sims compiled for the president.
■ See the interview.
■ Trump tweeted his comeback to Sims this morning: “He was nothing more than a gofer. He signed a non-disclosure agreement. He is a mess!”
■ The government shutdown let vandals run amok at Joshua Tree National Park, doing damage that may take nature centuries to repair.
■ Updating coverage: Trump pal Roger Stone was due before a federal judge today on charges of lying to Congress, tampering with witnesses and obstructing an investigation into coordination between the Trump campaign and Russia.

‘The people the bigots are hurting are themselves.’ Neil Steinberg reflects on “those boys from Covington High School in Kentucky, caught on video in some kind of exchange with a Native-American man.”
■ Even the Illinois State Rifle Association is distancing itself from what the Tribune’s Dahleen Glanton calls “gun fanatics who racially attacked Illinois state Sen. Elgie Sims after he called for tighter gun control laws in the aftermath of a deadly shooting at a south suburban mall.”

I-L-L. The University of Illinois at Urbana-Champaign is on alert after confirmation of measles in the community.
■ Anti-vaxxers seem at the heart of a measles outbreak in the Northwest, fueling a county public health director’s fears: “What keeps me up at night is eventually having a child die from this completely preventable situation.”

FaceTime warning. After discovery of a serious and embarrassing security flaw, which lets someone call you via FaceTime and listen to your Macintosh or iPhone’s microphone—whether you answer or not—Apple is promising a fix.
■ Gizmodo: “Disable FaceTime Right Now.”
■ USA Today lists other programs you can use.
■ A water-resistant phone may have saved the life of a man trying to rescue his dog from icy Lake Michigan.

Coca-corruption? A co-director of the public health group U.S. Right To Know says a new report suggests Atlanta-based Coca-Cola has undue influence at the Atlanta-based Centers for Disease Control and Prevention: “This looks like a local corruption story with global health implications.”
■ A new global ranking finds the U.S. becoming more corrupt under Donald Trump.

Most-clicked link … in yesterday’s Square was a link to the item that was most-clicked in Friday’s Square: Mary Schmich’s list of “8 things you must never, ever do when it’s really, really cold in Chicago.”
■ If you enjoy clicking on links, please consider doing your part to keep these clickable links coming: Support Chicago Public Square for a few pennies a day.

Thanks … to reader Joe Orihuela—first to note a comma missing in the phrase “schools, universities, courts, museums and zoos” above.