Seeing this edition of Chicago Public Square for free? Thank Reed Pence, Jim Peterson, Cate Plys, Teresa Powell and Barbara Powers. Please consider joining them here in supporting Chicago’s new front page. (Hey, if your last name begins with Q, you could have this space to yourself next time.) And now the news: 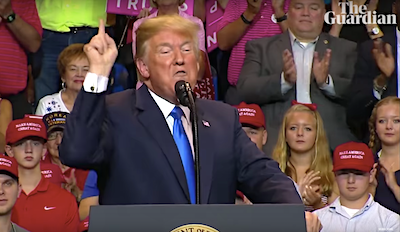 ‘Horrendous people.’ In Pennsylvania last night, the president of the United States escalated his war on journalists.
■ Columbia Journalism Review: “The rambling nature of Trump’s rallies, of course, inevitably gives way to lies.”
■ Susan Glasser in The New Yorker: “Trump is lying more, and he’s doing it on purpose.”
■ CNN’s Jim Acosta walked out of a White House briefing after press secretary Sarah Huckabee Sanders refused to disavow the president’s “enemy of the people” schtick.
■ Wonkette’s Evan Hurst: “Acosta walked out … and everybody should have followed him.”
■ The New York Times defends its decision to hire Sarah Jeong as an editorial board member despite her years-old sarcastic tweets that it concedes “only served to feed the vitriol.”
■ HuffPost reporter Travis Waldron: “The Times had nothing to disavow, and Jeong nothing to regret.”
■ TV and radio reporters on Detroit’s West Side were attacked while on assignment Thursday.
■ The Onion “Proudly Stands With The Media As The Enemy Of The People.”

We broke it, you fix it. The Trump administration wants the ACLU to track down the hundreds of immigrant parents the administration separated from their children and deported.
■ Potential presidential candidate—and billionaire—Tom Steyer blasts Democrats in Congress for not pushing to impeach Trump, who he says is “wildly corrupt and … well past the threshold to kick him out of office.” But the Cubs lost. Dozens of anti-violence protesters shut down Lake Shore Drive on their way to Wrigley Field yesterday, and Cubs fans mostly took it well.
■ The protesters left their marks on the Drive. (Photo: NBC Chicago reporter Lexi Sutter.)
■ A Tribune editorial: “Yes, cops should report when they point their guns.”

Boom. The Trib’s Ryan Ori examines the transformation of Chicago’s West Randolph Street neighborhood through the lens of a couple who bought a home there in 1989 for $240,000 and just sold it for $8.5 million.
■ Lollapalooza is bringing what the Trib describes as a record surge of Airbnb rentals—$3.3 million’s worth for hosts—many in nearby South Side neighborhoods including Bronzeville, Pilsen and Woodlawn.
■ Mayor Emanuel tells the Trib he’s planning a $10 million overhaul of the older stretch of Chicago’s Riverwalk, between State Street and Lake Shore Drive. 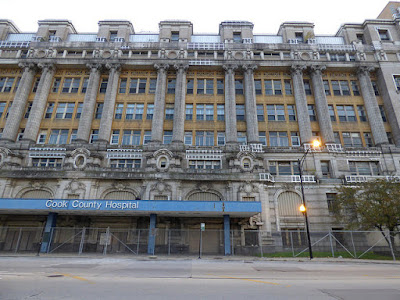 ■ Multimillion-dollar renovations for the Uptown Theatre and the old Cook County Hospital have won another round of approval. (Photo: Harry Carmichael in the Chicago Public Square Flickr group. Come join!)