‘Horrific’ video. Scenes obtained by CNN show a rioter dragging a police officer by the helmet down the Capitol stairs, where he was kicked, punched and bashed with an American flagpole.
■ The AP: “Only days later is the extent of the danger from one of the darkest episodes in American democracy coming into focus.”
■ The Conversation: A guide to the hate symbols seen during the riot. 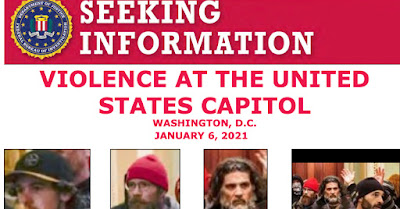 ■ Environmental journalist Emily Atkin: “The antler guy isn’t a climate activist. He’s an eco-fascist.”
■ Time rounds up the laws that could be used to prosecute the Capitol insurrectionists.
■ A law professor explains: “Can you be fired for joining a violent mob that storms the Capitol? Of course.”
‘If I had been recognized, we wouldn’t be having this conversation.’ Chicago Rep. Mike Quigley tells the Sun-Times’ Lynn Sweet about a harrowing flight back from D.C. alongside celebrating maskless Trump supporters.
■ 11 journalists recount for The New York Times what it felt like to get caught in the turmoil.
■ John Harris at Politico: The assault on the Capitol “needs to be examined with the equivalent of the 9/11 Commission.”
■ Columnist Dahleen Glanton in the Tribune: “Black people were left to clean up the mess … left by whites who stormed the Capitol in an attempt to force Congress to invalidate Black votes.”
■ Delmarie Cobb at The Triibe: “America owes a debt of gratitude to Black women.”
‘Resign and go away as soon as possible.’ At least two Republican Senators are calling on President Trump to leave the White House. 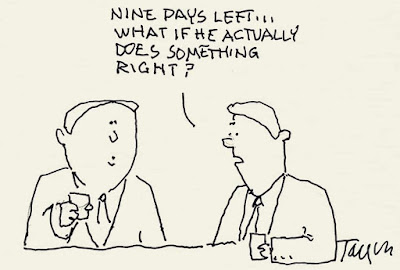 ■ The House was moving to implore Vice President Pence to take the reins of power—and, if he refused, to impeach Trump again. (Cartoon: Keith J. Taylor.)
■ The Atlantic’s David Frum: “Republican support for the impeachment … is the first step toward the renewal and recovery of the party.”
■ Yale historian Timothy Snyder (On Tyranny) warns in the Times: “America will not survive the big lie just because a liar is separated from power.”
■ American University historian Michael Brenner in The Washington Post: “Pre-Nazi Germany tells us the fight to save American democracy is just beginning.”
■ In a stirring video, Arnold Schwarzenegger makes the same point.
■ But newbie Illinois Congresswoman Mary Miller is still justifying the invocation of Hitler during her speech to Trump supporters.
Radio ultimatum. One of the nation’s biggest broadcasters, Cumulus Media—owner of, among others, Rush Limbaugh’s Chicago home, WLS-AM—has told its on-air personalities to stop suggesting the election was stolen or “expect to separate from the company immediately.”
■ Poynter’s Tom Jones: Fox News and other reactionary outlets are “holding up a shiny object over here to distract you from the insurrection and destruction over there.”
Money walks. The world’s largest hotel chain and Blue Cross Blue Shield are among big corporate donors withholding donations from lawmakers who voted against Electoral College certification of Joe Biden’s presidency.
■ The PGA is yanking a major golf championship from a Trump-owned course.
■ BuzzFeed News: Republicans who voted to overturn the election after the Capitol was attacked now are calling for “unity.”

‘He represents the cops too well.’ The Sun-Times’ Neil Steinberg says Chicago’s riot-defending Fraternal Order of Police President John Catanzara “isn’t an embarrassment to the force. He’s an embodiment.”
■ Aldermen are calling for him to quit.
■ Across the country, police departments are investigating to see whether their own officers joined the Capitol riot.
■ Critic Aaron Barnhart: ABC’s The Rookie shows how police dramas can “call out racial inequities in the justice system.”
Deadly rampage. Police say one man was responsible for the hours-long Saturday shooting spree that Saturday left a University of Chicago doctoral student, a security guard and a 20-year-old man at a convenience store dead.
■ The crimes were the work of a guy who littered Facebook with raving videos before police shot and killed him.
Madigan, interrupted. The AP says “once-invincible” Illinois House Speaker Michael Madigan’s failure to nail down another term recalls “a drawn-out debacle” from close to half a century ago.
■ If Democrats can’t make a call by Wednesday, Republicans get a say on the full House floor.
‘Get. Us. Vaccinated.’ A Trib editorial condemns the “sluggish rollout” of COVID-19 shots.
■ Over teachers’ objections, Chicago schools were reopening today. 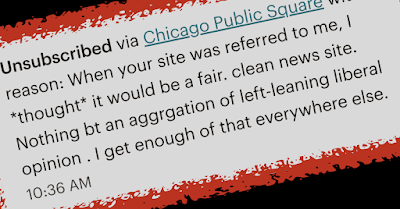 Chicago Public Square lost a reader Friday. Here’s the cancellation note: “When your site was referred to me, I *thought* it would be a fair. clean news site. Nothing bt an aggrgation of left-leaning liberal opinion . I get enough of that everywhere else.” You can help replenish Square’s subscriber ranks by inviting a friend to subscribe free.
■ Thanks to Pam Spiegel for making this edition better.
Email ThisBlogThis!Share to TwitterShare to FacebookShare to Pinterest
← Newer Post Older Post → Home