Vaccine breakthrough. Pfizer says the early numbers suggest its experimental vaccine may be 90% effective in preventing COVID-19.
■ The company’s chairman hails “a great day for science and humanity.”
■ President-elect Biden, naming members of his coronavirus task force—including a whistleblower the Trump administration dumped earlier this year—cautions that widespread shots may be “many more months” away.
■ President Trump’s son questions the announcement’s timing.
■ But Wall Street’s enthusiasm was historic: The Dow logged a record intraday leap.
All clear for Pritzker. After a COVID exposure scare, Illinois Gov. J. B. Pritzker and his staff have tested negative for the virus.
■ WBEZ: “The First COVID-19 Death In Illinois Foretold The 10,000 Today.”
■ Trump’s election night party may have spread the virus again.
‘Veep was not this good.’ That’s one Twitter take on the comedy of errors behind a Trump campaign news conference at a Philadelphia landscaping company that shares a name with a fancy hotel—held just as a flood of news organizations declared Biden the winner.
■ A reporter’s first-person account: “I saw Donald Trump’s presidency come crashing down at Four Seasons Total Landscaping.”
■ Oh, and one of the guys featured in that conference is a convicted sex offender.
■ HBO’s John Oliver preferred a House of Cards comparison: “It’s full of political intrigue, there’s a sexual predator pretending to be president at the very heart of it and it’s gone on for four seasons too long.”
‘Pure joy.’ Saturday’s declaration of Biden’s victory drenched Chicago in elation.
■ Neil Steinberg in the Sun-Times: “The greatest threat to face the United States since the British torched the White House has been vanquished.”
■ Tribune columnist Dahleen Glanton: “Trump’s knee is no longer on your neck.”
■ WBEZ: What a Biden presidency could mean for Chicago.
■ What an undercount in the census stands to cost Illinois: Probably a bundle of cash—and a congressional seat.
Reality checks. PolitFact: “The media’s ‘call’ of Biden as the winner doesn’t hold [the] force of law.” 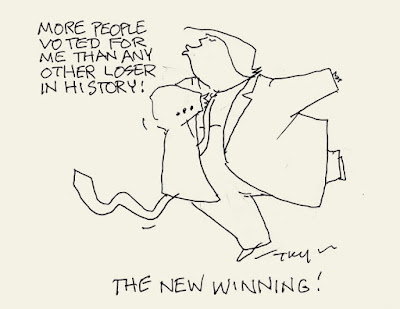 ■ Trump has yet to concede …
■ … casting a shadow over transition work. (Cartoon: Keith J. Taylor.)
■ Sun-Times columnist Laura Washington says to brace yourself for “Trump, 2024.”
You’re welcome. The Washington Post’s Margaret Sullivan says the media flubbed plenty during the Trump presidency but might nevertheless have saved democracy.
■ Poynter’s Tom Jones on how to cover Trump—or not—during the lame-duck weeks ahead: “News outlets have to think long and hard about what truly is news at this point.”
■ Trib critic Michael Phillips: Hollywood predicted Trump’s rise and fall.
■ CNN’s Brian Stelter reports Slate’s package of “Goodbye Trump” articles lifted the site to an all-time traffic record.
How’d voting go for you? Take a one-minute survey to help the Better Government Association make things better next time.
■ Late vote dumps have pushed incumbent Democratic U.S. Rep. Lauren Underwood ahead of Republican challenger Jim Oberweis …
■ … and boosted the probability of more Democratic control over Lake County.
■ More from John Oliver: The joy of dumps.
Final Jeopardy!s. Before his death Sunday, Jeopardy! host Alex Trebek left enough episodes in the can to run through Christmas Day.
■ Trebek’s executive producer: “He was really that great.”
■ Vox: His successor had yet to be named.
Thanks to David Meyerson (yes, relation) for a reminder that Jeopardy! gets an exclamation point!
Email ThisBlogThis!Share to TwitterShare to FacebookShare to Pinterest
← Newer Post Older Post → Home