Another vaccine. Moderna says a major trial finds its COVID-19 vaccine 94.5% effective—putting it and Pfizer in line for emergency deployment in the U.S. within weeks.

■ Even as Donald Trump’s administration keeps President-elect Joe Biden’s team out of the pandemic loop, Biden’s advisers are planning to meet with vaccine makers. 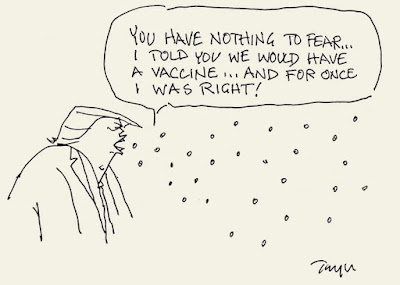 ■ The Daily Beast: “Hospitals Are Being Overwhelmed … and Trump Has Left It to States to Solve It.” (Cartoon: Keith J. Taylor.)
■ The Conversation: A data-driven model shows wearing masks saves lives—and the earlier a community starts, the better.
■ An eye-opening animated graphic tracks COVID cases since June by states’ Democraticness and Republicanness.
‘Do we want to sit with people at Thanksgiving, and weeks later attend their funeral?’ Experts are skeptical about even careful families’ plans to gather for the holiday.
■ Tribune columnist Eric Zorn: “The holiday could hardly be more of a superspreader event than if it had been designed by the coronavirus itself.”
■ Santas are likely to greet kids at the mall this season from behind plexiglass.
■ Illinois, Cook County and Chicago stay-home advisories are now in effect.
‘I am lucky. And I’m scared.’ The Trib’s Heidi Stevens: “I took a COVID-19 test as a precaution. A week later, I was hospitalized.”
■ The AP: At least 65 staffers at World Health Organization headquarters in Geneva have it.
■ First performed at Northwestern Memorial Hospital just five months ago, double lung transplants—which can save coronavirus patients’ lives—have happened there six more times since.
■ Britain’s Prime Minister Boris Johnson—who fought off COVID-19 in April—is back in quarantine after contact with someone who had it.
Whoops. Trump tweeted something of a concession to Biden—“He won because the Election was Rigged”—and then backtracked.
■ The Trump campaign is backing down from a key tenet of its lawsuit to block Biden’s pivotal win in Pennsylvania.
■ A history professor writes for The Washington Post: “What the history of coups tells us about Trump’s refusal to concede.”
‘We’re going to protect the Dreamers on Day One.’ Biden’s chief of staff says the new administration will waste no time defending people brought to the country as children by parents who entered illegally.
■ Speculation that Biden may tap Illinois Sen. Tammy Duckworth for his cabinet has triggered jockeying to fill her seat.
‘Our family members … repeat this racist nonsense.’ In a sharp rejection of his heritage, Loyola University law student Bobby Vanecko has written an open letter to his cousins, condemning his great-grandfather, Chicago Mayor Richard J. Daley; his great-uncle, Mayor Richard M. Daley; and one of his father’s cousins, Ald. Patrick Daley Thompson.
■ The alderman responds: “That young man is entitled to his own interpretations of facts and history.”
‘I did not need to go back.’ Environmental journalist Emily Atkin spent three hours on Twitter’s would-be conservative challenger, Parler, following every account the site recommended: “They were all people and institutions with a history of spreading climate denial.”
■ A Colorado State University professor’s research says Trump and Biden tweets reveal competing views of masculinity.
HBO-Amazon deal. Ending a monthslong standoff, HBO Max will be available on Amazon Fire devices beginning Tuesday.
■ Netflix has ordered a second season of its Space Force comedy just as Trump’s real Space Force faces the prospect of big changes under Biden.
Star watchers, rejoice. Decades after disappearing from public view, the Adler Planetarium’s historic and iconic Zeiss projector is back in Chicago.
■ A new era of spaceflight has dawned with SpaceX’s launch of four astronauts to the International Space Station. 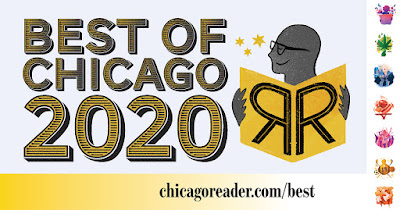 You can help Chicago Public Square—free. The Chicago Reader’s Best of Chicago poll is open for nominations through Dec. 8, and your vote is key to Square’s defense of its 2019 titles.
■ Of course, you can also help not for free.
Email ThisBlogThis!Share to TwitterShare to FacebookShare to Pinterest
← Newer Post Older Post → Home