‘We will be leaving.’ After the Nov. 3 election, rightly celebrated journalists Carol Marin and her longtime reporting collaborator Don Moseley will step down at Channel 5, and Marin is ending her role at Channel 11’s Chicago Tonight, too.
■ Media critic Robert Feder: Marin has been “the winner of every major award in broadcast journalism.”
■ In conversation with your Square proprietor on WGN Radio in 2009, Marin recalled surviving 9/11 in New York City.

Six months later. Half a year after Illinois became one of the first states in the nation to issue a stay-home order for the COVID-19 pandemic, Gov. Pritzker and two of the state’s public health leaders look ahead to what comes next.
■ Chicago Public Square on March 16: “If you’d hoped the COVID-19 crisis would be over in a month, think again.”
■ All Illinois bars and restaurants were ordered to close by the end of that day.
■ It was a final day of in-class attendance before Chicago Public Schools closed for the pandemic.
■ The most-clicked link by far in that day’s Square: Nutritionists’ list of 16 things to stock up on at Costco. 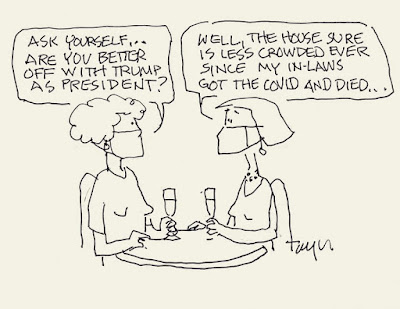 ■ Journalist Bob Woodward, promoting his new book on Donald Trump, Rage, shares his “shock” that the president “possessed the specific knowledge that could have saved lives” in “the lost month of February.”  (Cartoon: Keith J. Taylor.)
■ The Conversation: How to build public confidence in a coronavirus vaccine.

Illinois ‘eviction cliff.’ As Pritzker’s statewide pandemic eviction moratorium ends this week, Chicago magazine’s Sara Freund says renters and landlords face a crisis.
■ A landlord tells the Tribune: “If I lose my properties to the bank, and the bank eventually does an eviction, now we’re all out on the street.”
■ The pandemic-driven biggest surge in unemployment since the Great Depression is driving a food crisis.

Murder details. Autopsy reports reveal grisly details of the killing of husband-and-wife attorneys Thomas Johnson and Leslie Ann Jones in their Oak Park home.
■ The contents of Johnson’s wallet were found scattered on a bedroom floor.

‘I have never seen such intense interest—and fear—about an election in my decades of reporting on politics.’ The Sun-Times’ Laura Washington channels her mom to help people avoid committing voter fraud in November.
■ The Trib’s Kelli Smith shoots down disinformation scams going the rounds in Illinois as Election Day nears.
■ Bernie Sanders: A win for Joe Biden is no “slam dunk.”
■ One of Donald Trump’s favorite companies is nearing a deal to take over TikTok in the U.S.

‘Cataclysmic.’ A Sun-Times editorial loops together melting polar ice, rising sea levels, raging wildfires in the West and the devastating derecho that blasted Chicago last month: “Just part of the beginning of the destruction to come” if the nation and the world don’t step up to address the climate crisis.
■ Trump today was headed to fire-scarred California.
■ Vox co-founder Ezra Klein on the lack of good choices for those in the thick of the wildfires: “We couldn’t shelter indoors, taking refuge with friends or family, because of the coronavirus. We couldn’t slip into nature because of the fire.”
■ The Onion: “Trump Tempers Fears About Wildfires By Drinking Cup Of Flames.”

We’re No. 6. And 9. And … [Adding missing link.] One Illinois rounds up how the state’s universities fare in the latest U.S. News & World Report rankings.
■ Search the list by school, city, state or ZIP code. 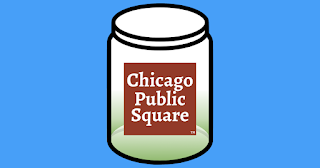 ‘It has very quickly become a daily must-read. And it’s funny.’ That’s a reader’s unsolicited praise for Chicago Public Square. You can help keep Square coming with a one-time tip or a recurring pledge of as little as $1.