‘People … will be erased.’ The executive director of an election reform group warns Politico that Illinois faces a census crunch—caught between the Trump administration’s resistance to a full count and the pandemic’s disruption of the process that will determine the state’s legislative districts: “If we don’t have a full and accurate count … representation and federal funding won’t be equitable for 10 long years. If … the Census Bureau processes the numbers properly, then there very well may need to be a delay in redistricting.”
■ The Illinois Senate president warns the census affects more than you realize.
■ If a census taker hasn’t come to your door yet, don’t count on it happening at all (Sept. 1 report).
■ So count yourself now in 10 minutes or less here.

Free COVID shots? Confronting what the AP calls “a strong undercurrent of skepticism rippling across the land,” the Trump administration has outlined a plan to offer a COVID-19 vaccine to all Americans—maybe beginning late this year.
■ The Daily Beast: “The Global Rush to Approve a COVID-19 Vaccine Keeps Getting Creepier.”
■ The City of Chicago’s top doc reports “real progress … on COVID,” reassuring reporters, “I am not canceling Halloween.”
■ The Conversation: The coronavirus is hundreds of times more deadly for people over 60 than people under 40. 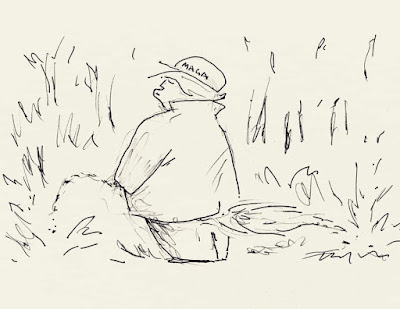 ■ Stelter colleague Oliver Darcy (later in that same post) says Trump steamrolled moderator George Stephanopoulos. (Cartoon: Keith J. Taylor.)
■ Here’s the transcript …
■ … including Trump’s gobsmackingly Freudian slip, a pledge that COVID-19 will be defeated by “a herd mentality.”
■ The Atlantic warns, “The press hasn’t broken its most destructive habits when it comes to covering Donald Trump.”
■ The Daily Beast: The membership of “Democrat Voters Against Joe Biden” includes Trump fanatics, a psychic … and no actual Democrats.
■ Sun-Times columnist Phil Kadner: “What if this were the last time you ever had a chance to vote?”

Welcome to Bizarro World. In a reversal of traditional roles, editorials in the Tribune and the Sun-Times encourage voters to keep a Cook County Circuit Court judge the Democratic Party has declined to endorse for retention.
■ In coverage of this story, the email version of yesterday’s Square omitted a customary disclaimer that your Square publisher’s wife will be on the retention ballot.

‘If Donald Trump is trying to quash something, it must have real value.’ The Sun-Times’ Neil Steinberg, a skeptic on “diversity training,” says the president’s assault on the practice has brought him around.
■ The Trib’s Clarence Page, who’s Black: “I wince when I hear the words white privilege.”
■ A new survey finds about a third of Illinoisans between 18 and 39 don’t know the Holocaust was connected to World War II.

‘Nearly flawless.’ Critic Aaron Barnhart praises a Netflix documentary series about the January 1986 “day the space program lost its innocence,” Challenger: The Final Flight.
■ The Sun-Times’ Richard Roeper says it may be “the most comprehensive and humanized version of events yet.”
■ On the 30th anniversary of the Challenger explosion, your Square publisher recalled the horror of those first few hours.

‘I’d be lost without it.’ That’s a reader unsolicitedly singing the praises of Chicago Public Square. If you, too, would be lost without this service, please consider supporting its production—which you can do for as little as a $1 tip or recurring pledge. (Fun fact: Square supporters kick in an average of $6.83 per month.)