‘Harmful COVID misinformation.’ Not just Facebook. Not just Twitter. Both services removed a video shared by President Trump, in which he falsely claimed children are “almost immune” to the coronavirus.
■ CNN’s Reliable Sources newsletter on the vicious circle of lies that pass from Fox News to Trump and back again: “It wasn’t just any video that Trump shared. … It was a clip from his morning chat with Fox & Friends.” 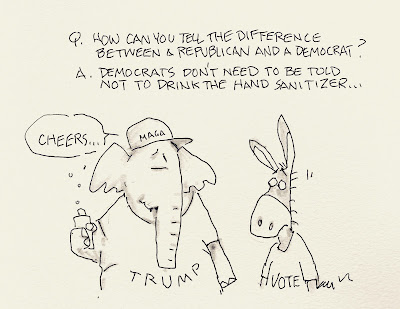 ■ The Associated Press: “The president is increasingly out of step with the federal government’s own medical and public health experts.” (Cartoon: Keith J. Taylor.)
■ Even as the coronavirus death toll grows, the AP finds the number of U.S. tests per day is falling.
■ Columnist Steve Chapman: Trump’s Axios interview revealed him “as an ignorant bumbler who has learned absolutely nothing about doing the job he was elected to do.”
■ The Onion mocks the White House press corps: “D.C. Journalists In Awe Of Australian Reporter Able To Speak To Trump Without Succumbing To His Raw Animal Magnetism.”

On a prayer. Chicago’s Catholic schools plan to reopen in-person five days a week this fall …
■ … even though the city’s public schools won’t, at least through November.
■ Gov. Pritzker says, when a COVID-19 vaccine becomes available, he doesn’t see a reason to require that kids get it before returning to school.
■ NPR: What to look for in your school’s reopening plan.

‘Another stay-at-home order might be in your future.’ Pritzker says if Illinois’ local governments don’t step up their enforcement against the spread of the coronavirus, he’s ready to enact a fresh round of state restrictions.
■ Updating a story from yesterday’s Chicago Public Square: A Cook County teenager added to the statewide COVID death toll didn’t die of the coronavirus.
■ The Arm and a Leg podcast about health care: Meet “the luckiest man alive … a guy who spent five weeks in a coma with COVID-19 ... and his medical bills are manageable.”

‘Don’t be stupid.’ That’s what Illinois Republican Rodney Davis told his fellow Republicans last week as he encouraged them to be safe in the pandemic. But now he has COVID-19.
■ Sun-Times columnist Mark Brown ponders why we can’t force people to wear masks when they vote.
■ Ready to vote by mail in Chicago? Here’s how.

Not so private. A win for the Better Government Association (second item in today’s Politico Illinois Playbook) means public officials will have a tougher time dodging scrutiny by using personal email accounts: An appeals court says private email and texts out of the Chicago mayor’s office are subject to freedom of information requests.
■ Read the ruling here (PDF download).

Uh-oh. In the first six months of the year—confronting a pandemic, civil unrest and violent crime still on the rise—Chicago police blew through almost their whole overtime budget.
■ The Justice Department’s Chicago surge is driving an increase in federal gun prosecutions.
■ Gov. Pritzker blames more than 120,000 cases of fraud since March on massive security holes in the federal Pandemic Unemployment Assistance program.

Target’s target. Delayed by the pandemic, a new Target store opens in Chicago next week.
■ Block Club Chicago: For the first time this summer, beachfront restaurants open this weekend.


Thanks to Pam Spiegel for spotting a typo above.