This explains it. Turns out President Trump has a financial interest in the company that makes hydroxychloroquine, the anti-malarial drug he’s been pushing as treatment for the novel coronavirus.
■ Citizens for Responsibility and Ethics in Washington: Jared Kushner’s coronavirus task force “isn’t normal Trump family grift; it is taking place with lives at stake.”
■ Trump snapped at a Fox News reporter who asked a tough question during his news briefing Monday … 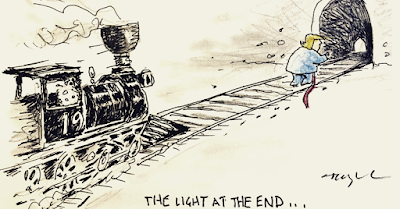 ■ … when he again touted “tremendous light at the end of the tunnel.” (Cartoon: Keith J. Taylor.)

‘Normal?’ Hah. The lead government scientist on the pandemic, Dr. Anthony Fauci, says life might never get back to “normal”—at least not until we have a vaccine.
■ The Tribune’s Rex Huppke: “The sooner Americans accept that ‘normal’ is nowhere in sight … the better we’ll all be.”
■ State and city health officers warn: Beware today’s warm weather.
■ Keep your distance if you venture out to see tonight’s pink moon—the year’s biggest supermoon.
■ HuffPost: How to wear a face mask without fogging up your glasses.

They were warned. Trump’s economic adviser told the administration in January that half a million deaths were possible from COVID-19.
■ David Frum in The Atlantic: “This is Trump’s fault.”
■ The president’s press secretary, Stephanie Grisham, is out after eight months during which she never hosted a news briefing—which has fueled mockery on Twitter.

‘The most dangerous election ever.’ Politico’s Natasha Korecki explains why, “in the midst of a deadly pandemic that has led more than a dozen states to delay their elections, Wisconsin is asking its citizens to come out and vote” today.
■ Justice Ruth Bader Ginsburg says the upshot is that Wisconsinites “will have to brave the polls, endangering their own and others’ safety. Or they will lose their right to vote.”
■ Wisconsin’s lieutenant governor tweeted this morning: “Welcome to the Shit Show!”
■ A Trib editorial: The state could have avoided this “hot mess.”
■ Elizabeth Warren wants the next coronavirus recovery package to protect citizens’ ability to vote in a pandemic.
■ The Boston Globe: Here comes the “Shortest. Presidential. Election. Ever.”
■ Chicago’s indicted veteran Ald. Ed Burke has lost a cliffhanger contest for his Democratic Party committee seat.

Who gets a computer? The Chicago Public Schools system is detailing which students get those 100,000 electronic devices for homeschooling.
■ Columnist Neil Steinberg: “The loss to education posed by the virus doesn’t seem to be on the radar of many. … But … it should be a topic of conversation, on par with the risk to the football season.”
■ USA Today asks, “Is it the end of language teachers?”
■ A suburban school district’s online classes have been “Zoombombed” with racist rants.
■ ProPublica reports Amazon’s self-publishing e-book operation, Kindle Direct Publishing, has become a haven for white supremacists.

‘I needed … a haircut.’ Mayor Lightfoot (at 48:50 in this video [link corrected]) is unapologetic after posing with a stylist who gave her a trim—even though the mayor has declared hairstyling one of those inessential activities Chicagoans should be forgoing in this crisis. 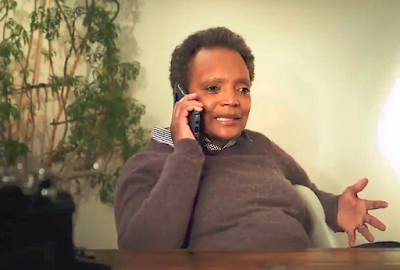 ■ One of her aldermanic critics dismisses her justification: “She is under no obligation to look good on national TV. … She is under an obligation to follow and promote social distancing.”
■ Gov. Pritzker says he expects “to turn into a hippie at some point.”
■ John Oliver, coincidentally addressing the issue—but not Lightfoot specifically—on the latest Last Week Tonight (at 15:26 in that video): “It’s not essential that you get your hair cut. People on TV don’t always look well-groomed. Trust me.”
■ The mayor’s fashion choice undercut her main message yesterday: That Chicago’s black community is at a dramatically higher risk than others in the pandemic.
■ Taking a Chicago Public Square question, the mayor dismissed the prospect of following San Francisco’s lead and shutting down the city’s mass transit system.
■ The New York Times: New research links high levels of air pollution to a higher death rate from COVID-19.
■ The Washington Post: “At least half of COVID-19 patients on ventilators don’t make it.”

Bye, C. A COVID-19 cluster has shuttered the suburban plant where the Jel Sert Co. makes Hi-C, Flavor Aid and Wyler’s drinks and drink mixes.
■ With fewer people driving—and those who are, driving less and therefore getting involved in fewer accidents—insurance companies are giving customers refunds.

Journalists adrift. Poynter is updating a list of news organization layoffs, furloughs and closures the pandemic has triggered or accelerated.
■ Among the casualties in hollowed-out Chicago: Overnight traffic reports on all-news WBBM.
■ Journalists in Seattle have launched a nationwide Journalist Furlough Fund on GoFundMe.