‘Cheap political stunt.’ Gov. Pritzker isn’t concealing his contempt for a lawsuit undermining his statewide stay-home orders during the COVID-19 pandemic.
■ New York’s mayor is warning the city’s Jewish community—and others—to stop gathering in crowds, as hundreds did last night for a rabbi’s funeral.
■ Fox 32 has fingered a Chicago nail salon that seems to have ignored stay-home edicts.
■ As Illinois golf courses reopen Friday, players face strict new rules.
■ The nation’s leading epidemiologist, Dr. Anthony Fauci, says that a second round of the coronavirus is “inevitable” and that, if the nation hasn’t taken all the countermeasures it can, “we could be in for a bad fall and a bad winter.”

Masks for the maskless. As Illinois prepares Friday to require people older than 2 to cover their faces inside stores and other places where they can’t keep their distance, Chicago has no unified plan to get masks to those without.
■ Block Club Chicago rounds up what else changes Friday.

‘He isn’t bound by the same health guidelines as the little people.’ Gizmodo’s Tom McKay takes Vice President Pence to task for visiting the Mayo Clinic and not wearing a mask, flouting the clinic’s rules and his own coronavirus task force’s guidance. 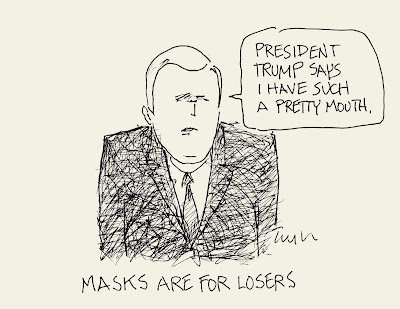 ■ Slate’s Christina Cauterucci: “Knowing everyone else would be wearing one to protect him, Pence seems to have had no reason to model considerate behavior.” (Cartoon: Keith J. Taylor.)
■ A Chicago hospital working with the Mayo Clinic reports promising results from the administration of convalescent plasma extracted from the blood of patients who’ve recovered from COVID-19.

Meat crisis. To objections from union leaders who complain President Trump is prioritizing cold cuts over worker safety, Trump’s ordering the nation’s meat processing plants to stay open during the pandemic.
■ A suburban Italian sausage factory has furloughed 150 workers.
■ CNN: Why meat processing plants are especially in crisis.
■ With plants shuttered, Pennsylvania farmers have had to kill more than 200,000 chickens this month (without turning them into food).
■ People for the Ethical Treatment of Animals is offering to train slaughterhouse workers to make vegan meats.
■ Chicago-area farmers markets face an uncertain start to the season.

Grounded. Chicago-based Boeing is cutting about 10% of its workforce.
■ Chicago’s Tootsie Roll factory is down 18 workers who’ve tested positive for COVID-19.
■ The International Labour Organization warns almost half the global workforce are in “immediate danger of having their livelihoods destroyed.”
■ Mayor Lightfoot foresees “a whole new class of jobs that didn’t exist before”—making sure people who enter buildings and businesses are well.
■ Small Chicago businesses chosen by lottery could claim $5,000 grants.
■ Illinois is pumping $250 million more into a small-business loan fund.

‘Because we’ve been bailing them out for years.’ The Tribune’s Eric Zorn shoots down Trump’s tweet asking why other states should help bail out Illinois’ struggling budget.
■ New York’s Olivia Nuzzi makes the case for broadcasting White House coronavirus briefings in their entirety, giving the public “a window into the president’s mind, transmitted directly from the president’s mouth.”

Pandemania! The Trib’s Mary Schmich coins new words for a troubled time.
■ The Sun-Times’ Neil Steinberg defines some real words for the pandemic.

A fight for the ages. Journalist Ted Cox, who was there, recalls the night legendary newspaper columnist Mike Royko—who died 23 years ago today—and “equally pugnacious” editor Bernie Judge squared off at the Billy Goat Tavern.
■ Speaking of Billy Goat memories, here’s one from February 2017.