Closing time. Chicago’s spelled out details of its shutdown for restaurants, bars and grocery store concession areas.
■ The Tribune has launched a running list of restaurants still open for pickup or delivery.
■ Add the AMC and Classic Cinemas movie theater chains to the list of those shuttering during the coronavirus pandemic …
■ … which is pushing some movies directly from theaters to online channels.
■ Saturday Night Live is out.
■ The books biz is in trouble, too.
■ A University of Michigan professor suggests a way to help businesses suffering in the weeks ahead: Buy gift certificates.
■ U. of C. economist Austan Goolsbee: Limiting your activity “is the best thing you can do for the economy, even if by conventional measures it’s bad for the economy.”

Closing time. Every Illinois K-12 school is shuttered as of today. The Trib answers frequently asked questions.
■ The Illinois State Board of Education concludes almost two-thirds of the state’s educators find their districts aren’t ready for remote learning …
■ … a massive experiment in which the world is about to begin.
■ Cook County Jail is releasing detainees considered “highly vulnerable” to COVID-19 infection.
■ Moms delivering babies during the pandemic face new challenges.

It’s Jared. Presidential son-in-law Jared Kushner reportedly told President Trump repeatedly the media were exaggerating the coronavirus threat.
■ Flashback to 2017: Trump was warned of “the worst influenza pandemic since 1918” …
■ … and in 2018, he bragged about cutting the federal pandemic response team.
■ He seems to have come around … 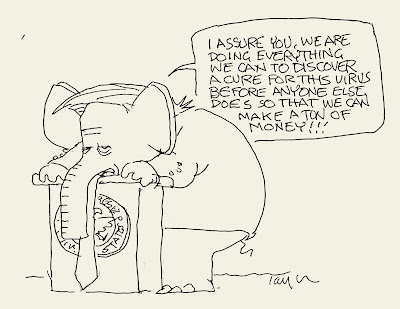 ■ … conceding hard times could last “until July or August.” (Cartoon: Keith J. Taylor.)
■ But he’s not winning fans among the nation’s governors.
■ And his vaunted Google website remains illusory.
■ The president’s sketchy answer to a question about what it’s like to be tested for the coronavirus (“It’s—you know, it’s a little bit of a—it’s a little bit of—of good doctors in the White House. But it’s a test. It’s a test. It’s a medical test. Nothing pleasant about it”) raises suspicions he was lying about having undergone a procedure that takes just 10 seconds.
■ Britain was also behind the curve.

‘If we die, we die for Christ.’ A Trump-supporting Florida pastor says his flock should keep flocking.
■ Satire from The Washington Post’s Alexandra Petri: “No, I will not leave the bar simply because I am ‘on fire.’”
■ An MIT professor says even the tough restrictions spreading across the country aren’t enough and recommends putting the military in charge of health care expansion nationwide.

‘Don’t feel sorry for the airlines.’ A Columbia University law prof says the industry doesn’t merit a bailout until it reforms the way it treats customers and employees.
■ Facing the prospect of bankruptcy by the end of May, it’s asking for aid far exceeding what it got after Sept. 11, 2001.
■ Slate’s Dan Kois says the TSA’s decision to let people carry 12 ounces of hand sanitizer onto airplanes reveals “just how much of contemporary American life is bullshit.”
■ Illinois is temporarily allowing curbside marijuana sales for medical patients.

Amazon stressed. It’s suspending shipments to its warehouses of items other than medical supplies and household staples …
■ … even as it looks to hire 100,000 new workers.
■ Jewel and Costco are hiring, too.
■ Accompanying a rush for toilet paper, which isn’t particularly useful against COVID-19: Gun sales are up.
■ The News Literacy Project: How to avoid contracting viral misinformation.
■ How Wikipedia is stamping out falsehood fires.
■ Have you cleaned your phone today?

After man. As the Shedd Aquarium closed to the public, it set its penguins free to wander the place in exploits it’s sharing on social media.
■ Outdoor attractions including Brookfield Zoo, Chicago Botanic Garden and Morton Arboretum were still open.
■ Trib columnist Heidi Stevens: “Facebook … is filling a gaping hole where our social lives, water coolers, parent groups, community meetings used to be.”