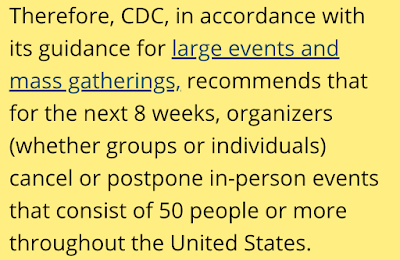 8 weeks. If you’d hoped the COVID-19 crisis would be over in a month, think again. The Centers for Disease Control and Prevention is now recommending that “events that consist of 50 people or more”—including “conferences, festivals, parades, concerts, sporting events, weddings”— be canceled and postponed for at least twice that long.
■ 16 national health care leaders say the best thing you can do to save lives is stay home …
■ … but federal workers were still (as of Square’s email deadline) expected to show up at “tightly packed office cubicles.”
■ A reason to be cautious everywhere: Miami’s mayor has tested positive for COVID-19—without showing any obvious symptoms.
■ Most-viewed feature Washington Post feature over the weekend: A (paywall-free) interactive graphic showing the value of “flattening the curve.”
■ A prison reformer warns the conditions inside jails and prisons represent a coronavirus threat “to any American with a jail in their county—that’s everyone.”
■ The U.S. Health and Human Services Department suffered a cyberattack overnight.
■ The stock market gagged again at the outset of today’s trading.

Closing time. Gov. Pritzker has ordered all Illinois bars and restaurants to shut their doors to dine-in customers by the end of the day.
■ Illinois was ahead of the curve.
■ Politico Illinois Playbook: Mayor Lightfoot and Gov. Pritzker seem not always to be on the same page.

School’s out … in Chicago after today, challenging teachers to figure out how to help kids learn remotely.
■ Scholastic has set up a “Learn from Home” website with three hours’ of work each day.
■ Even though Chicago’s public schools close tomorrow, needy kids can get free meals there.
■ Want to help people who may have trouble putting food on the table during the crisis? Here’s one way.

Pier pressure. Navy Pier is off-limits through at least April 2 …
■ … but public radio WBEZ says its studios on the Pier remain open.
■ All Illinois state parks are closed, too.
■ Chicago hospitals are limiting visits.

‘The federal government needs to get its s@#t together. NOW.’ Pritzker took his Twitter gloves off as he complained to the Trump administration about crowded and unsafe security conditions at O’Hare over the weekend …
■ … and he got some results. 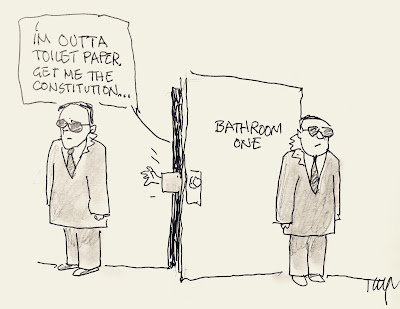 ■ Tribune columnist Dahleen Glanton says airports offer a clear view of President Trump’s ineptness. (Cartoon: Keith J. Taylor.)
■ The New York Times’ David Leonhardt lists Trump’s missed opportunities to address the crisis.
■ CNN: Trump lied when he said the virus is “something we have tremendous control of.”
■ He also lied about the coronavirus website Google was building.
■ Here’s what Google says it’s really working on.
■ The Supreme Court is shutting down.

‘I honestly feel like it’s a public service.’ A Tennessee man who’d hoarded—and then was stuck with—17,700 bottles of hand sanitizer has donated them to charity but is now under investigation for price gouging.
■ Nutritionists list 16 things to stock up on at Costco.

‘I haven’t seen my mother for a month.’ An Italian woman’s first-person account of life under that nation’s lockdown: “People are allowed to go out only for serious work and family-related matters, or to buy food and medicines, and must carry with them a certificate declaring the reason for leaving their homes.”
■ American journalist David C. Unger reports from Camogli, Italy: “These circumstances are horrific.”
■ Social critic Umair Haque: “Coronavirus Is a Small Taste of the Dystopian Future.”
■ Politico: Welcome to the political incompetence pandemic.

‘Actually helpful information.’ Variety TV critic Caroline Framke says last night’s presidential debate spotlighted what’s been wrong with most other televised debates.
■ Here’s Daily Kos’ blow-by-blow recap.
■ Veteran political columnist Charlie Madigan: “The most important thing … is that Joe is going to pick a woman as a running mate, and Bernie said he was likely to do that, too.”
■ Intelligencer handicaps the field of potential veeps.
■ The Guardian’s five takeaways include this one: “Biden avoided a complete debacle” …
■ … but he did lie about never having called for cuts to Social Security.
■ Vox’s Matthew Yglesias sums up last night: “Sanders is fighting a cosmic struggle. … Biden is talking about winning the election.”
■ Gov. Pritzker backs Biden.

‘Find a way to vote.’ A Trib editorial encourages you to turn out for the Illinois primary.
■ Can you be an election judge tomorrow? Chicago encourages you if you’re “a healthy and capable voter and find your precinct to be understaffed and overburdened … to offer to be sworn in as a substitute.”
■ Get help deciding how to vote in the Chicago Public Square voter guide.

Local news’ importance. In hard-hit Seattle, Seattle Times executive editor Michele Matassa Flores notes coronavirus coverage “has drawn new subscribers at record levels.”
■ Poynter’s Tom Jones: The pandemic “has proven something encouraging: Americans need—and more importantly, want—good journalism.”
■ CBS News offices have been emptied.
■ Sports broadcasters are having to improvise.
■ A psychotherapist’s nine tips for journalists—and others—fighting coronavirus stress include this: “Keep things near you that will remind you of what ‘normal’ looks like.”
■ It’s a tough time for people with anxiety disorders.


Thanks to Jim Parks for catching a redundancy above and to Pam Spiegel for some additional typographical housekeeping.