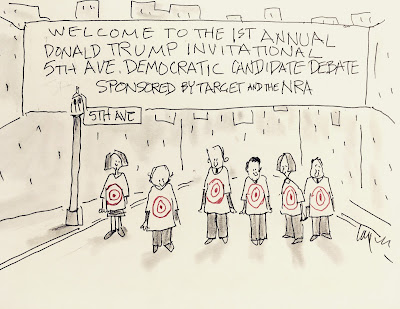 ■ Bernie Sanders, pro and con: A guy with “a clear path to beating Trump” vs. “A bizarre radical past that Trump … would use to destroy him.” (Cartoon: Keith J. Taylor, just out with his fourth Trump-themed book.)
■ Vox’s Ezra Klein sees an unbridgeable “epiphany gap” between “between what the president can do and what the public wants done.”
■ And now, it’s New Hampshire’s turn—beginning with tiny Dixville Notch.

‘She really messed up.’ Acknowledging that Cook County State’s Attorney Kim Foxx “bungled” the case of dissembling actor Jussie Smollett, the Sun-Times says Foxx has “proven to be thoughtful, committed and effective” and so endorses her reelection.
■ WBEZ: The Justice Department is eyeing a 2012 email in which an Illinois lobbyist praised a state worker who “kept his mouth shut” about an unspecified “rape in Champaign.”
■ The Justice Department is blaming four members of China’s military for one of the largest hacks in history—the 2017 theft of Americans’ names, Social Security and other personal records from Equifax’s system.

For sale: Lake Michigan? A University of Chicago law professor suggests a way to deal with the lake’s rising levels: “Sell the water.”
■ Chicago aldermen were poised today to consider a resolution declaring the city in a state of climate emergency.
■ Psychologists are warning about the rise of climate anxiety—especially among the young.
■ The spread of the coronavirus is fueling health anxiety among Chicagoans.
■ The Daily Beast: Climate change could supercharge the spread of other novel diseases.

‘Something significant.’ A new opera premiering in Chicago, Freedom Ride, spotlights a pivotal 1961 push for integration in the South …
■ … but Chicago Classical Review says it “reduces civil rights heroes to soap opera cliches.”

Chicago’s Oscars glow. A Chicago-raised ex-NFL player’s movie took the award for best animated short.
■ A Netflix documentary backed by Barack and Michelle Obama’s production company was a winner.
■ Trib critic Michael Phillips thanks the Academy for honoring “the most vital, most elegant, most unpredictable and best film of 2019.”
■ All the winners.

‘A worse Tribune would mean a worse Sun-Times.’ Sun-Times columnist Neil Steinberg grudgingly comes to the defense of his rivals as they struggle against “that loathsome vivisectionist of newspapers,” Alden Global Capital.
■ The dad of a former WBEZ Chicago reporter warns she’s “losing friends” in her home state of New Hampshire with a podcast that takes what The New York Times calls “a not always flattering look at the Granite State’s treasured first-in-the-nation presidential primary.”

Thanks to ever-vigilant reader Mike Braden for spotting a redundant between and a singular aldermen above.