Is keeping Chicago Public Square coming worth a few cents a day? Tap this button to join the roster of those who say yes: 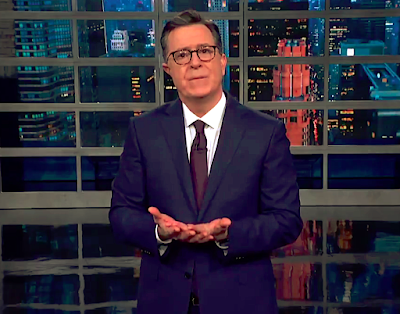 Trump’s victory lap. The president took to the stage at the annual National Prayer Breakfast to brandish newspaper headlines declaring him “ACQUITTED” and to complain that “our great country and your president have been put through a terrible ordeal by some very dishonest and corrupt people.”
■ Vanity Fair: Newly empowered, Trump has a growing enemies list that includes Romney.

‘When do the House Democrats bring another impeachment?’ The Tribune’s John Kass is not a fan.
■ Kass colleague Heidi Stevens: “I’m not sure Nancy Pelosi tearing up her copy of President Donald Trump’s State of the Union speech worked all that well. As political theater? It was fantastic.”
■ Pelosi’s State of the Union guest Fred Guttenberg, father of a girl shot and killed in the Parkland, Florida, mass shooting, is apologizing for shouting out an angry protest as Trump sucked up to gun fans.
■ Republican Illinois congressional candidate—and failed gubernatorial candidate—Jeanne Ives has been casting an impeachment-related falsehood about her opponent, incumbent Rep. Sean Casten. 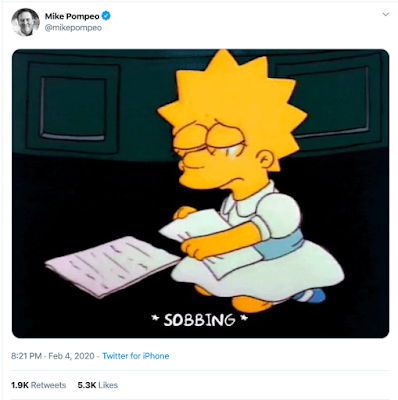 ■ Secretary of State Mike Pompeo screwed up when he tried to use a Simpsons meme to mock Pelosi.
■ Veteran Simpsons writer Bill Oakley tweeted to Pompeo: “Please do not ever ever ever use Simpsons material in your Twitter or watch the show or refer to it in any way” …
■ … and then Twitter’s spambots came after Oakley: “Accounts with no profile photo and 8 digits in their Twitter handle sure do love the Secretary of State and the phrase butthurt snowflake.”

Trump Next. A day after the president used his State of the Union address to blast local governments that, like New York and Chicago, offer protection for undocumented immigrants, his administration cited sanctuary-law restrictions as justification for blocking New Yorkers from enrolling in “trusted traveler” airline programs.
■ The Sun-Times says Trump’s declaring war on modern government architecture.
■ A University of Illinois emeritus professor says history shows America how to cope with what’s to come: “This is a discouraging moment. But we have been here before.”

Meanwhile, back in Iowa … With nearly all the votes finally counted in Tuesday’s botched caucuses, it was looking like a near-tie for Pete Buttigieg and Bernie Sanders. 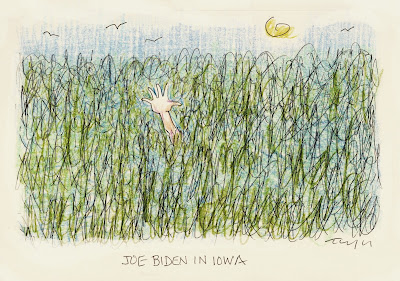 High school musical chairs. The latest in a series of scandalous administrative disruptions at Chicago’s Lincoln Park High School: An interim administrator who took over after the principal and assistant principal were dumped is herself out after video showed her grabbing a student by the face.
■ Here’s the video.

Red light for red-light cameras? Illinois lawmakers are weighing a bill that would outlaw those scandal-scarred devices statewide.
■ Regardless, State Comptroller Susana Mendoza says her office is calling it quits on help for local towns collecting red-light fines.

‘If you want to commit a crime on the CTA, you’re going to get caught.’ The Chicago Police Department is crowing about its identification of a suspect in the shooting of a man on a CTA Blue Line train yesterday morning.
■ A woman has been arrested on charges of stabbing a street performer at the Jackson Red Line station yesterday afternoon.

‘I’m going to fight her and everybody else.’ A Chicago alderman is unhappy with Mayor Lightfoot’s proposed protections to keep the planned Obama Presidential Center from pushing longtime residents out of Woodlawn.
■ The mayor’s proposal to reform Chicago’s much-maligned system of tax-increment financing for developers is similarly under fire for not going far enough.
■ The notion of legally and formally authorizing a network of places where drug addicts can safely get a fix is on the rise in Cook County.

Out at the Trib. Parent company Tribune Publishing’s offer of voluntary buyouts will cost the company decades of experience, including 40-year veteran music critic Greg Kot and several senior editors.
■ Vanity Fair: “The Hedge Fund Vampire That Bleeds Newspapers Dry Now Has the Chicago Tribune by the Throat.”
■ The New York Times is piling on digital subscriptions, but ad revenue is headed down.
_____
Thanks to Chris Koenig for an unending flow of great ideas.