‘Absolutely disgusting.’ MSNBC host Chris Matthews is under fire for comparing the Nevada primary victory of Bernie Sanders—a Jew whose relatives were killed by Nazis—with France’s fall to the Nazis. 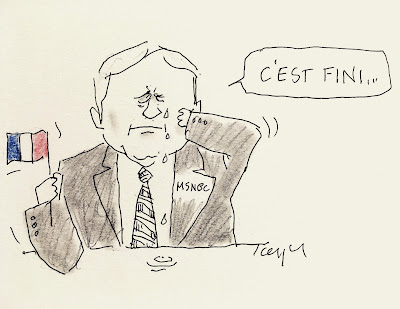 ■ Poynter media critic Tom Jones: Matthews was “really tasteless and completely inappropriate or, at the very least, just flat-out dumb.” (Cartoon: Keith J. Taylor.)
■ Sanders has a new plan for the federal government to offer tuition- and fee-free child care and pre-kindergarten to all American families.
■ MSNBC host Jason Johnson has complained about “the island of misfit black girls” backing Sanders.
■ African American Tribune columnist Dahleen Glanton: If Michael Bloomberg is the Democratic nominee, African Americans will take one for the team and vote for him.
■ Bloomberg’s Edgewater campaign office was vandalized with graffiti reading “racist,” “sexist,” “GOP” and “oligarch.”
■ The Daily Beast: “Trump Speaks to Massive Indian Crowd, Mispronounces Almost Everything.”

Bus break. The CTA is launching an experiment to speed up buses by letting people board through front and rear doors.
■ A teenage boy was in critical condition after being stabbed early today and running to a nearby CTA Red Line station for help.
■ Chicago’s Six Corners intersection—at Cicero and Irving Park—is in for an upgrade over an empty Sears store and a hole in the ground dating back four years.

Unrelated developments.
■ $14 million could settle a lawsuit filed by public defenders and law clerks who complain Cook County inmates they represented masturbated in front of them.
■ The Sun-Times’ Neil Steinberg on coverage of newly on-the-loose convicted ex-Gov. Rod Blagojevich: “We should turn away in revulsion.”

‘It’s not about their ignorance, it is our arrogance.’ A couple of hundred Chicago journalists jammed yesterday’s second Chicago Journalism Town Hall for four hours of self-examination and discussion about how to protect and rebuild the news business and its audience.
■ Washington Post columnist Margaret Sullivan: “With Trump unbound, the news media need to change. Yes, radically.”
■ A New York anchor has declared war on the “TV dress” for female broadcasters.

Flatlined. A guy who credited the president for inspiring a plan to launch himself 5,000 feet into the air to determine if Earth is flat died in the attempt over the weekend.
■ One of the female African American mathematicians who inspired the movie Hidden Figures is dead at 101.

6 inches—or more? Brace yourself for a fresh round of snowfall in the Chicago area.
■ It could dump as much as an inch an hour beginning tomorrow morning.
■ And 12 inches isn't out of the question.