‘A conspiracy to conceal a criminal sexual assault at the highest levels of state government.’ Outrage is growing in response to an email written by an ally of House Speaker Michael Madigan.
■ Lawmakers are calling for criminal investigations and legislative hearings.
■ A Tribune editorial: “Who bestowed so much hubris on Michael McClain that he would ask [then-Gov. Pat Quinn’s] office to reward the cover-up of a rape?”

Coyote incursions. In separate incidents, a 5-year-old boy and a 32-year-old man were reportedly bitten by coyotes on Chicago’s Near North Side.
■ Bomb threats yesterday to downtown locations—including Water Tower Place and Block 37—proved unfounded. 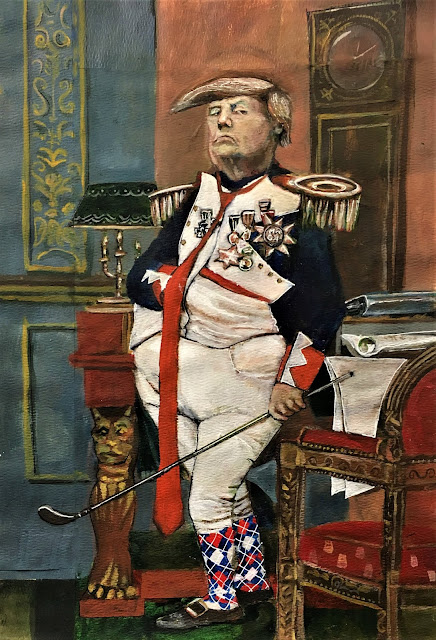 ‘Insulting and demeaning.’ A Republican U.S. senator calls a briefing from the Trump administration on the U.S. attacks that killed Iran’s Gen. Qassem Soleimani “the worst … I’ve seen.”
■ Sun-Times Washington Bureau Chief Lynn Sweet: “It’s hard to trust Trump on anything.” (Illustration: Jonathan Franklin.)
■ CNN’s Brian Stelter: “What is the Trump admin doing to restore credibility? Not much that I can see.”
■ The Trib’s Rex Huppke: Trump “has purged from government most of the people who might give us reassurance that the administration is putting America’s interests above Trump’s own.”
■ The Washington Post’s Margaret Sullivan faults TV for relying on analysis from those who’ve supported previous wars.
■ Updating coverage: The U.S. House was set to vote today on a measure limiting the president’s ability to take further military action against Iran.

Trump Tower drama. One of R. Kelly’s girlfriends faces domestic battery charges after a fight—partly posted to Instagram—on his birthday yesterday with another of his girlfriends at his Trump Tower condo.
■ Google’s under orders to turn over a year’s worth of email, location and other data from the account of actor Jussie Smollett, who allegedly faked a racially motivated attack on himself.

‘Very scary.’ The owner of a Great Lakes resort is among those the Tribune says are grappling with a generation’s worth of water level changes in just a few years.
■ The New York Times: With the biggest change in decades to environmental protections, the Trump administration is moving to clear pipelines and other big infrastructure projects without detailed federal review.

‘If Chicago airports are letting departing travelers drop cannabis in these amnesty boxes, shouldn’t they let arriving travelers take weed out of the box?’ Journalist Mark Jacob tweets an idea in response to Chicago airports’ deployment of depositories for people to surrender their now-legal-in-Illinois marijuana before breaking the law by taking it on a plane.
■ Chicago doctors are reporting a spike in pot-related emergency room visits.

‘Renounce your titles, you cowards.’ London-born Los Angeles Times (and formerly Chicago Tribune and Sun-Times) journalist Kim Janssen praises Harry and Meghan for “their intention to wean themselves from the teat of the British state, upon which they have feasted for far too long. But why stop there?”
■ Columnist Neil Steinberg: “Two royals decline to obstinately infest the stage.”

Happy birthday to ChicagoPublicSquare.com. This domain was registered three years ago today. Want to celebrate? Here you go.