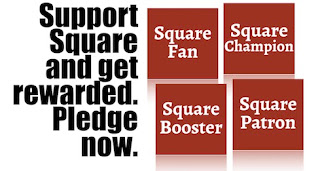 Chicago strangler? The Tribune says police are reviewing dozens of unsolved strangulation cases over the last two decades—on the theory they may be the work of a serial killer.
■ Video posted to social media shows a Texas cop shooting a woman multiple times and killing her moments after she said [correction] she was pregnant.
■ Reporters working on a book about a disgraced Baltimore police task force write for The New York Times: “Police Officers Are the Bad Guys With Guns.”

Journalists in solidarity. When the Springfield State Journal-Register newspaper’s editor was walked out of the office after submitting her resignation—hoping she could thereby save others’ jobs—the whole newsroom walked out with her.
■ A San Francisco police raid on a reporter’s home—armed with a sledgehammer—was “plainly unlawful,” a First Amendment expert says. 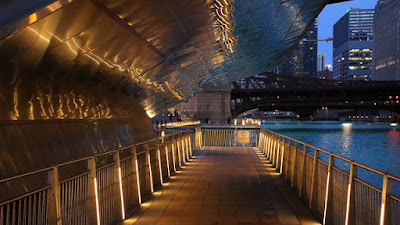 Rahmwalk? The Sun-Times reports that Mayor Emanuel has said privately that if anything is named after him, he’d like it to be Chicago’s Riverwalk. (Photo: Harry Carmichael in the Chicago Public Square Flickr group.)
■ A new lane closure on the inbound Eisenhower Expressway will make commuters’ lives tough for the next couple of weeks.

Vice, mayors.
■ The mayor of the far-southwest suburb of Sandwich is quitting after being charged with soliciting a prostitute.
■ In the bribery trial of a contractor, the ex-mayor of Markham admitted taking tens of thousands of dollars in kickbacks.

Meteor hunt. An Adler Planetarium astronomer is appealing to the self-interest of those seeking a meteor that rocketed through Chicago’s sky Friday night to share samples of what they find with science: “Once they’re classified … they’re worth more to collectors.”
■ Beware “zombie raccoons” out there.

A Trader Joe’s first. The grocery chain is opening a store on Chicago’s South Side.
■ Jewel-Osco employees have a judge’s clearance to sue the company for age discrimination.
■ Amazon is offering employees $10,000 to quit—if they agree to …
■ Streetwise: Being poor in Chicago carries a high cost—for banking, health, housing and more.

Hulu’s fate? Disney is taking full control of Hulu, paving the way for Disney to, in the words of Disney’s chairman, “completely integrate Hulu into our direct-to-consumer business” …
■ … which may mean Hulu gets the more adult programming that Disney bought from Fox but that might not be a fit for the nascent family-friendly Disney+ streaming service.
■ Google’s given tens of thousands of dollars’ worth of free ads to an anti-abortion group spreading deceptive messages.

‘She acknowledged that she had made a mistake.’ The Trib’s Dahleen Glanton praises actress Felicity Huffman for admitting to cheating her daughter’s way into an elite university. But, Glanton says, fellow celeb defendant Lori Loughlin “doesn’t get it.”
■ Huffman faces four months in jail.

Thanks … to reader Pam Spiegel for catching an error in the police shooting item above.