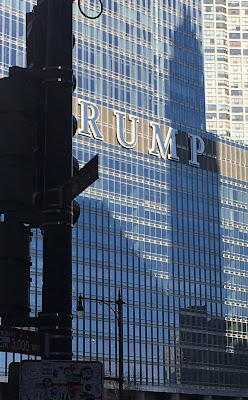 ■ The company behind the massive and controversial Lincoln Yards project is planning its first project on Chicago’s South Side.
■ McDonald’s says it’ll stop lobbying against legislation to raise the minimum wage.

300+ pages. The New York Times says the still-unreleased Mueller report on Russian interference in the 2016 election runs that long—raising new questions about the adequacy of Attorney General Bill Barr’s four-page summary.
■ Twitter’s working on ways to label Trump tweets that—had they been posted by others—it would delete.

‘Please help me. I’ve screwed up.’ The Tribune’s John Kass paraphrases a memo from Cook County State’s Attorney Kim Foxx, under fire for her office’s handling of the Jussie Smollett case—which Trump wants the feds to investigate.
■ The Trib’s Rex Huppke: “It’s tough to … not assume a person with friends in high places just leveraged his influence to get out of charges that would’ve landed a regular non-connected schmuck in prison.”
■ Foxx on WBEZ: “People … don’t understand the intricacies of the justice system.”
■ The Republican leader of the Illinois House wants the Illinois attorney general to investigate.
■ Capitol Fax proprietor Rich Miller on a state lawmaker’s call to ban tax credits for productions that hire Smollett: “Press release about undrafted bill designed to attract attention attracts attention.”
■ Steve Rhodes in The Beachwood Reporter: “Kim Foxx stuck her paws in it in a completely untoward way, the CPD lied and leaked all the way through, Smollett is an ass, those brothers were complicit, and the mayor is the biggest hypocrite of them all. There is no hero here, only a cast of villains.” 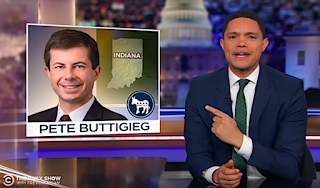 ‘There’s no dirt on this guy. Like, nothing.’ On last night’s Daily Show, a sarcastically disappointed Trevor Noah scrutinized the unlikely rise of presidential candidate and South Bend, Indiana, Mayor Pete Buttigieg (pronounced: “booty-judge”).
■ Another day, another mayor enters the race for the White House.

‘Squabbling over who has taken cheaper shots.’ The Sun-Times’ Rachel Hinton wraps up last night’s final TV debate between mayoral candidates Toni Preckwinkle and Lori Lightfoot.
■ Joining the Trib and Sun-Times, Crain’s is endorsing Lightfoot.
■ Preckwinkle’s campaign is back to advertising on TV.
■ Among the things suburban voters get to decide Tuesday: Should an 18-year-old high school senior become mayor?
■ Don’t vote stupid: Check the Chicago Public Square voter guide. 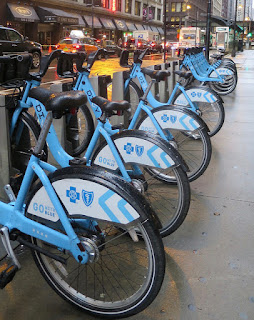 Bike battle. Uber and Lyft are duking it out for control of Chicago’s Divvy bike-sharing system, and critics say Mayor Emanuel’s pushing the city into a fiasco like the deal that put the city’s parking meters in private hands. (Photo: Brian Crawford in the Square Flickr group.)
■ Trib architecture critic Blair Kamin: Chicago’s selection of a design for the expansion of O’Hare International Airport “flunked the test of transparency.”

Wanna use your Illinois driver’s license to get on a plane? Get ready to pay. The thing now in your wallet or purse won’t pass muster at airports as of late next year, and if you want to use a license (and not a passport) to fly, Illinois Secretary of State Jesse White—whose office dragged its feet for years on new federal security rules—says you’ll have to visit his office … and bring cash.
■ Illinois’ delays in processing food-stamp applications could cost it millions in federal penalties.
■ Ex-Better Government Association CEO Andy Shaw: “Illinois voters should not be asked to consider a progressive income tax that will cost wealthy individuals and companies more than $3 billion a year … until Springfield lawmakers do their jobs by demonstrating … the responsible budgeting, spending and cost-cutting they’ve mostly avoided for decades.”

Restaurant reverence. This year’s James Beard Award nominees include 16 from Chicago.
■ New at the Museum of Science and Industry: Wearable technology, including jetpacks and touchscreen tattoos.

Has this edition of Chicago Public Square pleased you? Thank readers whose support makes it possible, and please consider joining them for a few pennies a day.