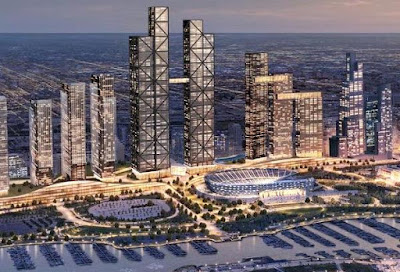 Skyline ‘audaciousness.’ The Tribune’s Ryan Ori details plans that could stretch Chicago’s string of high-rises all the way south to Soldier Field and McCormick Place, anchored by a new transit center. (Image: Perkins + Will.)
■ The Trib’s John Kass says the City Council’s green light for the Lincoln Yards “monstrosity” on Chicago’s North Side “comes at just the wrong time for [Chicago mayoral candidate Toni] Preckwinkle.”
■ Even though the council has now approved a much-protested plan for a new police training academy, candidate Lori Lightfoot is pushing an alternative: Moving training to Chicago’s empty schools.
■ WBEZ: Lightfoot’s campaign took big bucks from a “dark money” organization that has so far been able to hide where it got the cash.
■ The Sun-Times boils down where Lightfoot and Preckwinkle stand on key issues confronting Chicago.
■ The lineup’s set for the city’s April 2 runoffs: Voters in 15 wards will return to pick their aldermen. 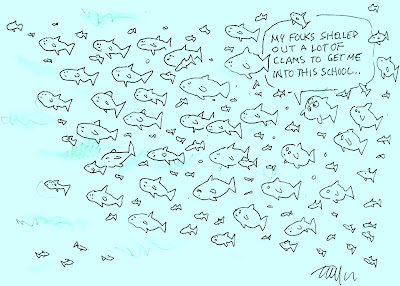 ‘A simple exchange of ideas, with my idea being a guarantee that your not-particularly-bright offspring will attend one of the nation’s finest universities and your idea being $1 million that you will wire to my bank.’ Trib columnist Rex Huppke welcomes you to his Highly Ethical and Totally Legal College Admission Consulting Service.
■ The Associated Press: The mastermind of the (real) college admissions scheme for the wealthy “set up a charity that wove a deep web of deception and fraud to mask bribes and payoffs, funneling millions of dollars … under the nose of U.S. officials” …
■ … as he sent his son to Chicago’s DePaul University, to which he conveniently donated $150,000.
■ The Washington Post: Universities are racing to quell the outrage.
■ The Wall Street Journal details how the feds’ “Operation Varsity Blues” investigation unraveled the scam.
■ The Sun-Times’ Mary Mitchell: “Most of us know of a working-class or poor parent who has gamed the system to get their child into a better public school.” (Cartoon: Keith Taylor.)

Maxed out. Now that the U.S. has followed much of the rest of the world and grounded all Boeing’s 737 Max jets …
■ … here’s what’s ahead for air travelers.
■ The Guardian: Fears are growing the plane has a fatal safety flaw.
■ The Sun-Times’ Lynn Sweet offers insight into why President Trump dragged his feet on this. 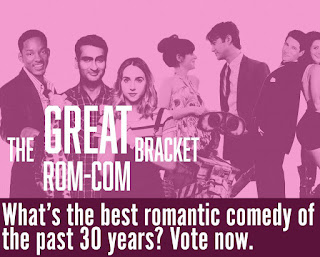 Let’s try this again. Ironically, on a day when we encouraged you to follow Square on Facebook, Facebook and its sibling apps—including Instagram, Messenger and WhatsApp—yesterday suffered one of the company’s longest outages ever …
■ … and the company found itself at the center of a criminal investigation.
■ Oh, well: There’s always Twitter …
■ … even though its founder has a misinformation problem …
■ … but that problem isn’t as bad as originally reported in yesterday’s now-corrected edition of Square. (Sorry about that.)
■ … And, hey, Twitter is adding a camera to its mobile apps so you can more easily tweet photos.
■ Bloomberg Businessweek’s cover story: Facebook’s nonstop “apology machine.”

We’re No. 3. Time Out’s annual index ranks Chicago the world’s third greatest city, with residents who are the “happiest, most likely to sing the praises of their city’s dining and drinking scenes and—unsurprisingly—most proud of their city.”
■ The next-gen 5G cellphone service debuts in Chicago next month—but it’ll run ya an extra $10 a month.

3/14 = Pi Day. Here’s some of what you can snag to celebrate.
■ A Google worker has set a new world record for calculating pi …
■ … which wouldn’t have been necessary, had an Indiana governor had his way more than a century ago.
■ The Trib’s Gregory Pratt mourns the loss of a beloved South Side pizzeria.