Can they get along? One of the questions to Chicago mayoral candidates Lori Lightfoot and Toni Preckwinkle in debate last night: How will they work together if Lightfoot becomes mayor and Preckwinkle remains Cook County Board president?

■ See the whole debate here.
■ Beachwood Reporter proprietor Steve Rhodes: “One of the promises folks see in Lightfoot is that she’ll bring a fresh crew of independent-minded, smart people into her administration. Preckwinkle, meanwhile, is surrounded by mopes.”
■ The Tribune’s Kristen McQueary: “Preckwinkle and her surrogates now are attempting to paint opponent Lori Lightfoot as a sympathizer of police brutality. … But the truth is not as sexy as the overwrought rhetoric spewed from the stage at a weekend Preckwinkle rally.”
■ In interviews with Crain’s, Preckwinkle was “particularly effective in talking about school violence,” while Lightfoot “rip[ped] Preckwinkle good.”
■ Longtime political observer Mike Fourcher: “I’ll be voting for Toni Preckwinkle for mayor, but I don’t have anything bad to say about Lori Lightfoot.”
■ The candidates meet at 6 p.m. tonight in a debate you can watch on the Fox 32 website …
■ … and on the station’s Facebook page, where you can suggest questions you’d like to see posed.
■ And don’t be like Neil Steinberg, who reveals he early-voted in ignorance: Check out the Chicago Public Square voter guide before you cast your ballot.

‘If what the state is telling me is true, this is one of the most senseless and evil acts I have heard of.’ That’s a judge’s characterization of the murder of a Chicago cop over the weekend—a crime prosecutors say was a case of mistaken identity.
■ At the request of the cop’s mother, his handcuffs were used to transport the suspect to lockup. 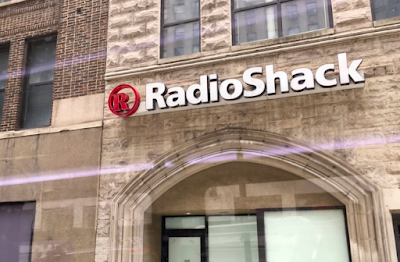 Highs and lows. The company behind the big Lincoln Yards development planned for the North Side is proposing a 47-story building for the Michigan Avenue space previously occupied by RadioShack, Walgreens and Subway. (2018 Google Maps photo: S A Chasen.)
■ A 39-story building is on the drawing board for land now occupied by one of Chicago’s last Barnes & Noble bookstores.
■ A 5-year-old boy and his grandfather were rescued from a hole in the ground after a grate gave way on Chicago’s North Side yesterday afternoon.

Your breakfast, spoiled. The wealthy German family that controls several of the world’s best-known brands—including Krispy Kreme, Panera Bread, Keurig Green Mountain, Peet’s Coffee and Caribou Coffee—ashamedly concedes their ancestors enthusiastically supported Adolf Hitler and used forced labor under the Nazis …
■ … and so will donate $11 million to charity and publish a historian’s findings on their family’s misdeeds.

‘Deeply flawed.’ Chicago lawyer and novelist Scott Turow analyzes Attorney General William Barr’s summary of the Mueller investigation into President Trump’s campaign.
■ On Twitter, Trump condemned the media for pushing “the Russian Collusion Delusion. … They truly are the Enemy of the People and the Real Opposition Party.”

Climate change tipping point? Wired’s Clive Thompson: “Republicans are deciding it’s real.”
■ On the latest Chicago Public Square podcast, Thompson pal Cory Doctorow explains the notion of “peak indifference,” and the subsequent challenge of persuading people it’s not too late to do something about it.

■ The Trump administration is proposing to reverse an Obama-era rule designed to promote manufacture of more efficient lightbulbs.
■ Global energy demand last year grew more than any other year this decade—and greenhouse-gas-emitting coal plants provided a lot of the increase.
■ The New York Times: President Trump’s nominee to become interior secretary—up for a confirmation hearing Thursday—two years ago blocked a move to protect endangered species from pesticides.

You wouldn’t be seeing this edition of Chicago Public Square … if not for the support of people who chip in a few cents a day to keep it coming. Please consider joining them here.
■ Even if you don’t have a cent to spare, you can help Square grow simply by inviting a friend or two to subscribe—free—here.

Thanks … to reader Pam Spiegel, first (of several) to note the word million missing from the Krispy Kreme item above.