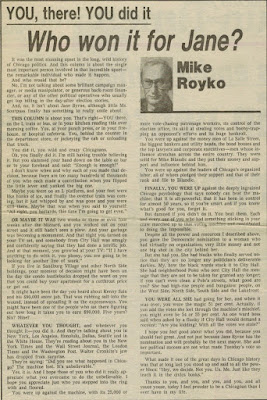 ‘You did it, you wild and crazy Chicagoans.’ Forty years ago this week, Sun-Times columnist Mike Royko cheered the city’s vote to stick it to the Democratic Machine in the election that made Jane Byrne mayor.
■ In the final hours of this year’s race, the field of 14 candidates has been making a final push.
■ Veteran political strategist David Axelrod calls this “the least predictable mayoral race in the history of Chicago.”
■ Politico: A new poll finds the contest “wide open.”
■ A Sun-Times editorial: “Lightfoot can win this thing.”
■ The Tribune: “Four closing arguments for Daley.”
■ Steve Rhodes in The Beachwood Reporter: “I mentally locked in my vote for mayor two days ago …”
■ The Trib’s Eric Zorn offers a “wild guess” at the outcome.
■ PolitiFact analyzes the truthfulness of the candidates’ resume claims and gives just one a “Pants on Fire!” rating.
■ All the papers’ endorsements and more—including how, where and when to vote—in the Square voter guide.

‘White people in Chicago … have a long history of telling black people what is best for black people.’ The Trib’s Dahleen Glanton says race is the unspoken issue at the heart of the fight over where to build the Obama Presidential Center.
■ The Better Government Association concludes that, under Mayor Emanuel, City Hall has been slacking off on environmental oversight—notably on the Far South Side, one of the city’s most environmentally burdened neighborhoods.
■ Hit-and-run accidents are at historic highs in Chicago—and the experts tell the Trib they aren’t sure why.

‘Every time someone’s driving somebody, I lose.’ Director Spike Lee did little to hide his disappointment that the best picture Oscar went not to his movie, BlackKklansman, but to Green Book, which has drawn criticism for advancing a “white savior” approach to race relations.
■ On Twitter, President Trump dumped on Lee for “a racist hit on your president” during Lee’s acceptance of the best adapted screenplay award. 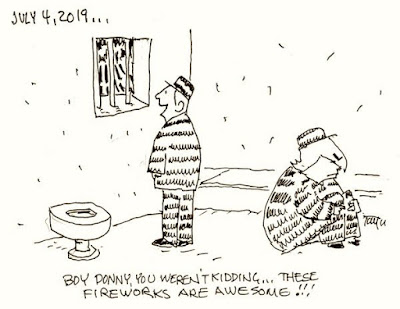 ■ The Washington Post: An ex-campaign staffer alleges in a lawsuit that Trump kissed her without consent.

He couldn’t flee. Updating coverage: Singer R. Kelly remained in jail over the weekend, unable to post bail after his arrest on charges of aggravated sexual abuse—but his lawyer hoped to round up the cash soon.
■ Lawyer Michael Avenatti, who’s representing at least one of the alleged victims, says he’ll give prosecutors a second video showing Kelly sexually assaulting a minor.
■ TMZ has a more graphic account.

‘Daytime shows are … holding hands with this s__t.’ HBO’s John Oliver condemns the “predatory” psychic industry—and the TV hosts and programmers who have abetted it, including “Manhattan sex monster” Matt Lauer.
■ Actual, unironic headline on actual NBC News website story: “Why do students takes so many standardized tests?”