‘Amazing.’ The Sun-Times’ Mark Brown says mayoral candidate Lori Lightfoot’s first-place finish in yesterday’s election—to face second-place finisher and Cook County Board President Toni Preckwinkle—was remarkable “by any standard.”
■ So the April 2 runoff will almost certainly bring Chicago its first black female mayor—the largest such U.S. city with that distinction—and maybe, in Lightfoot, its first out LGBT mayor.
■ See their speeches here: Lightfoot and Preckwinkle.
■ The Tribune’s Heidi Stevens: Whoever wins, “the outcome is good news” …
■ … but probably not for the business community, according to Crain’s Greg Hinz.
■ Also headed to a runoff: Two candidates for city treasurer.

Embattled alderman survives. Even as he faces federal charges of shaking down a Burger King franchise, Ed Burke strolled to reelection in his Southwest Side ward …
■ … but the Sun-Times’ Neil Steinberg says Burke may be finished anyway …
■ … and Burke’s successor as chairman of the powerful Finance Committee faces a runoff in April.
■ An alderman accused of encouraging his staffers to take their shirts off to earn raises is out …
■ … along with at least two other incumbents …
■ … and a Trump-loving 19-year-old challenger to Ald. Marty Quinn.

‘I’ve been crying all day.’ Outside a Chicago hospital, a mother pleaded to see her son, who’d been critically wounded by police.
■ A woman is suing Chicago, complaining a cop—her ex-boyfriend—goaded her into shooting herself in the face.
■ Police have released a photo of a man wanted for shooting and killing a 17-year-old on the Northwest Side Monday night.
■ A former suburban police chief is on probation after shooting his 22-year-old son. 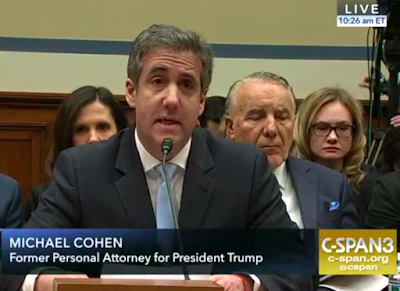 ‘Racist,’ ‘conman,’ ‘cheat.’ Updating coverage: Those are some of the epithets President Trump’s estranged ex-lawyer Michael Cohen slapped on the president in testimony before the U.S. House today (not yesterday, as erroneously reported in yesterday’s Square).
■ See video here.
■ The draft of Cohen’s opening statements.
■ The documents Cohen was set to present to back up his case that Trump has become “the worst version of himself.”
■ The new Democratic chairman of the House Oversight Committee opened the session with this vow: “The days of this committee protecting the president at all costs are over.”
■ The Onion: “White House Convenes Panel Of Scientists To Make Case That Trump Capable Of Crushing Train With Bare Hands.”

In otter news … The Shedd Aquarium is offering guests the chance to touch, train and play with sea otters—but it won’t come cheap …
■ … and maybe you could do it for free on a river in downtown Milwaukee.