If you’re reading Square for free, thank those who support it. You can follow their lead here. And now the news: 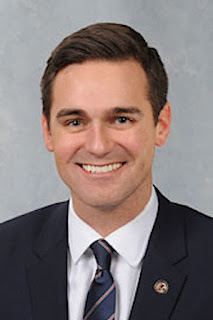 ■ One of his colleagues on a—this is not a joke—legislative task force on sexual harassment recalls him as “liked and respected … and obviously hiding.”
■ Gov.-elect J.B. Pritzker surprised the new Illinois General Assembly—by showing up.

R. Kelly accusers. Answering Cook County State’s Attorney Kim Foxx’s plea, at least two women have stepped forward to complain of inappropriate conduct by the singer against them in Chicago.
■ Lady Gaga says she regrets recording a song with Kelly and will pull it from online music services.
■ The documentary series about Kelly’s misconduct has been drawing big numbers for Lifetime.

Amazon CEOs also shopped for … Jeff Bezos, founder of “Earth’s most customer-centric company,” is splitting with his wife, amid reports he’s been seeing an ex-Los Angeles TV anchor.
■ The divorce could be history’s most costly …
■ … and could make MacKenzie Bezos the world’s richest woman.
■ The Bezos divorce is a big deal for the National Enquirer, which is aligned with President Trump, who’s no fan of Bezos, who owns the Trump-critical Washington Post.

Chew carefully. The Food and Drug Administration says the government shutdown means it can’t continue some routine food-safety inspections.
■ Trump says he’ll “probably” declare a national emergency if Congress doesn’t approve a wall separating the U.S. from Mexico.
■ NBC News: A test of the steel prototype wall Trump has advocated “proved it could be cut through with a saw.”
■ The Daily Show has unearthed Trump’s 2004 advice to college grads: “If there’s a concrete wall in front of you, go through it, go over it, go around it, but get to the other side of that wall.”
■ Texas Observer’s Christopher Hooks: “Trump’s Border Wall is a Vortex of Stupidity that Trump and the GOP Can’t Escape.”
■ FiveThirtyEight analysis finds “surprisingly high support for President Trump” among even Democrats in Illinois’ congressional delegation.

Mayoral ideafest. Chicago’s shrinking but still huge field of candidates to replace Rahm Emanuel is bursting with schemes to change the way things are done in Chicago schools:
■ Gery Chico is proposing to add eight selective enrollment and six vocational high schools.
■ Bill Daley wants to swap the local school council system for a network of similar boards with oversight over multiple neighborhood campuses.
■ A Sun-Times editorial questions Daley’s proposal to merge Chicago Public Schools with the City Colleges of Chicago.
■ Chicago Ald. Ricardo Munoz has checked into an Indiana rehab facility, as his challengers call for his resignation.

Chicago’s mega year. The Tribune’s Ryan Ori says the city’s “on the verge of … multiple megadevelopments” and rounds up the biggest of the big to watch in 2019 …
■ … while in Oak Brook, retail stores, restaurants, office space, condos, luxury rental apartments and park space could appear where McDonald’s used to be headquartered.

Mystery in space. A telescope in Canada has detected so-far unexplained FRBs—“fast radio bursts”—1.5 billion light years away. Meanwhile, back on Earth:
■ Columnist Neil Steinberg has given up his landline phone, which “saved us close to $500 a year.”
■ After power surges that destroyed electric appliances in thousands of homes, ComEd is replacing a suburban neighborhood’s power lines.

Corrections. You have to open Square pretty quick to beat eagle-eyed Mike Braden. In yesterday’s edition, he spotted a missing period and suggested some clarification in an item about free Adler Planetarium admission for federal government employees during the budget shutdown. The rest o’ yas are slackin’.