Did you catch yesterday afternoon’s special edition of Chicago Public Square detailing federal charges against Chicago’s most powerful alderman, Ed Burke? If not, go back and read it now. Then thank The Legion of Chicago Public Squarians, whose financial support makes such things possible. Please consider joining them here for just a few cents a day. And now, the latest on Chicago’s biggest political scandal in years: 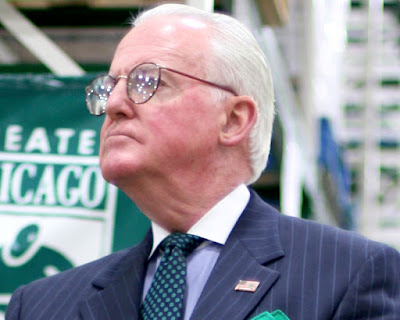 Burke quits 1 job. Facing political corruption charges, Burke tells Mayor Emanuel he’s resigning as chairman of the City Council’s Finance Committee. (But he’s still—as of Square’s morning email deadline, anyway—an alderman.)
■ Sun-Times columnist Mark Brown: Burke’s voice in court yesterday was “the voice of a man who knows he’s facing serious legal trouble.”
■ County Board President and mayoral candidate Toni Preckwinkle’s campaign admits receiving the $10,000 contribution Burke allegedly extorted.
■ The Tribune’s John Kass: Preckwinkle’s campaign “is on the edge of panic.”
■ Another candidate, Lori Lightfoot, tells the Trib Preckwinkle has “got to explain what is the quid pro quo” in her relationship with Burke.
■ A spokeswoman for the mayoral candidate Burke endorsed, Gery Chico, says “Gery obviously will not accept support from Ed Burke in the upcoming mayoral race.” (Bottom of that NBC 5 report.)
■ Politico: Burke played piano at the wedding of another candidate, Susana Mendoza—who’s now also among those keeping her distance.
■ A Sun-Times editorial: “If the Chicago City Council, after all these years, continues to tolerate a culture of casual corruption—and it does—the best cure is a merciless U.S. attorney’s office. Bring it on.”

‘It was as though someone had grafted a Chuck E. Cheese onto a funeral parlor.’ Esquire’s Charlie Pierce recaps yesterday’s birth of a new Congress—including the divided response when Republican Liz Cheney invoked “Build that wall.”
■ Neil Steinberg in the Sun-Times: “The simple solution is for Trump to just declare the wall a reality and his duped followers will believe him.”

‘Impeach this mother______.’ One of Michigan’s new congresswomen, Rashida Tlaib, dropped an obscenity on the president just hours after getting sworn in.
■ The executive editor of the conservative Washington Examiner, Philip Klein: Tlaib “is right to refuse to apologize.”
■ The former youngest woman in Congress offers advice to those who now share that distinction, Alexandria Ocasio-Cortez and Abby Finkenauer.
■ Vox: Conservatives’ obsession with Ocasio-Cortez’s high school, explained.
■ Why she and so many other female lawmakers wore white yesterday.

A CTA record. Today marks the opening of the northern terminal of the 95th Street Red Line station—the most expensive in the Chicago Transit Authority’s history.
■ Beginning next week, United Airlines is lowering the boom on passengers’ “emotional support animals.”

Water Tower curfew. Cracking down on rowdy teens, Water Tower Place as of today requires kids under the age of 17 be accompanied by an adult Fridays and Saturdays after 4 p.m.
■ The executive director of Chicago’s beset Old Town School of Folk Music is retiring.