Trump unleashed. The president didn’t hold back on Twitter as he condemned his former adviser and TV costar—now the author of a White House tell-all—Omarosa Manigault Newman as “a crazed, crying lowlife” and “that dog.”
■ CBS News has audio backing up her claim Trump’s been recorded using the N-word.
■ From 2016: Comedian Tom Arnold said he’d seen an outtakes video showing Trump saying “every racist thing ever.”
■ One of Trump’s Celebrity Apprentice alumni, Penn Jillette: “Yeah, I was in the room.”
■ Late-night comics including James Corden had fun with audio of Manigault Newman’s White House dismissal: “I wasn’t sure the recording was real or not—until the part where Trump admits he doesn’t know what’s going on in the White House. Then I knew it was solid.”
■ On MSNBC, she said Trump “has done nothing” to help Chicago fight its plague of gun violence.

‘Who says sending anti-Trump texts to your girlfriend doesn’t pay?’ That’s USA Today’s lead for a story about a GoFundMe page to support legal expenses for Peter Strzok, fired from his FBI job Friday.
■ As of Square’s email publication deadline, the fund had topped $260,000.

Willow crooked. The Tribune reports the embattled Willow Creek evangelical megachurch agreed to pay more than $3 million to settle lawsuits over a church volunteer’s sexual abuse of two developmentally disabled boys.
■ A Christianity Today editorial: “Misguided loyalty harmed this historic congregation.”
■ A new Florida law requires public schools to prominently display the motto “In God We Trust.”
■ … which coincidentally happens to be half the title of a book that inspired the classic movie A Christmas Story. 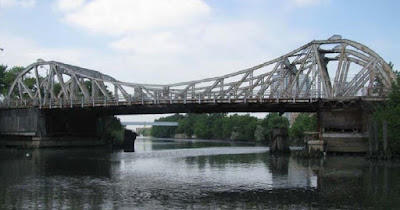 A bridge not too far. A group called Friends of Goose Island is proposing to buy the soon-to-be-replaced 114-year-old Division Street bridge over the Chicago River and move it just a bit north—to create what the Trib says would be a pedestrian and bike pathway at Blackhawk Street.
■ A Sun-Times editorial encourages you to weigh in before today’s deadline on a draft plan for the evolution of Chicago-area transportation through 2050.
■ A Trib editorial: Revoke the license of Chicago’s notorious “Lincoln Park Pirates” towing service.
■ The Trib reports thousands of Airbnb rental registrations in Chicago have been canceled.

Your tax dollars at war. At a bill signing in Palatine, Illinois Gov. Bruce Rauner took his fight with House Speaker Michael Madigan to a new level: “I hope he’s been doing something illegal, and I hope he gets prosecuted.”
■ The governor’s vetoed a bill that would’ve applied workplace anti-discrimination requirements to businesses with fewer than 15 employees.

Good News Dept.
■ In Chicago over the weekend: No murders.
■ A Chicago institution has made U.S. News & World Report’s list of top 20 hospitals in the nation.
■ Another is No. 1 for rehabilitation. 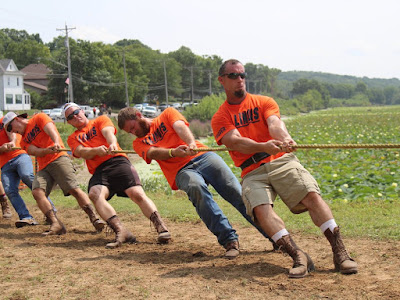 ■ Illinois beat Iowa in an annual tug-of-war across the Mississippi. (Photo: One Illinois/Ted Cox.)

Google’s watching. The Associated Press reports that Google wants to know where you go so badly that it records your movements even when you explicitly tell it not to.
■ The Guardian: How to shut it all down.
■ The CTA is upgrading security cameras at some Blue Line stations to HD resolution.

‘I am a Grade-A and carefully aged piece of word-slinging journalist meat.’ Trib columnist Rex Huppke pitches potential buyers of the paper on his value to the organization.
■ In the age of Trump, journalism schools are seeing an uptick in applications.
■ More than 100 publications are planning anti-Trump editorials for Thursday.

Earth in upheaval.
■ At least 20 people are dead after the collapse of an Italian bridge in a violent storm.
■ A firefighter has died fighting the largest fire in California’s recorded history.
■ Trump’s Interior secretary blames the California fires on environmentalists.

Correction. The original headline on the previous edition of Chicago Public Square misspelled the word “besieged.” Thanks to Rob Walton, first reader to report the mistake.