Reading this for free? Thank supporters including J.J. Sedelmaier, Jack Hafferkamp, Jameson Branson, Jane Hirt, Janean Bowersmith, Janice Kieckhefer, Jeffery L. Angevine, Jerry Delaney and Jerry Role. And those are just some of the Js in The Legion of Chicago Public Squarians. You can join them for as little as $5/month or $60/year (or more if you’re a philanthropically inclined supporter of daily email news briefings). And now, the news:

‘This is just staggering.’ An environmental medicine researcher talks to the Tribune about a federal report linking some of the nation’s highest cancer risks from air pollution to a DuPage County company co-owned by a firm Illinois Gov. Bruce Rauner co-founded.
■ Dozens of medicines for kids, adults and pets have been recalled over contamination concerns.
■ The feds are investigating the most popular e-cigarette product—as parents ask why the government isn’t doing even more.

A history of trouble. A Chicago alderman concedes the city had for years cited code violations in a building where nine kids died in a fire Sunday.
■ Fireworks may have been a factor.

‘We haven’t seen the mayor learn from his mistakes.’ A new challenger to Mayor Emanuel says her goals include making sure every child can walk to a great neighborhood school.
■ A namesake of one of Chicago’s most influential political operatives is also considering entering the race. 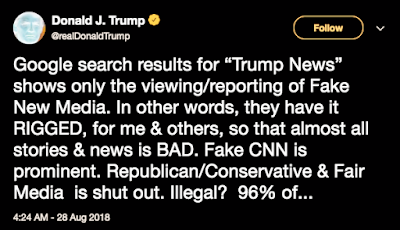 Trump vs. Google. Following the president’s tweet that Google results for the phrase “Trump news” are “RIGGED,” (bad link corrected) his economic adviser, Larry Kudlow, says the administration is “taking a look” at whether government should regulate internet search.
■ Search Google News for “Larry Kudlow,” and this comes up prominently—suggesting he should use Google more often.
■ The Daily Show in March: A history of Larry Kudlow.
■ Wells Fargo’s CEO complained about a critical story by Bloomberg; then the reporter was reassigned.

‘We should pretend John McCain didn’t pick Sarah Palin as his running mate in 2008.’ That sarcastic tweet by the politics editor at Vox triggered a massive blowback.
■ Sen. Lindsay Graham tearfully shared McCain’s last words to him.
■ As revealed by a collection of McCain’s appearances on Saturday Night Live, McCain had a gift for comedy.
■ But today’s primary in his state of Arizona is no laughing matter.
■ Races to follow in tonight’s Arizona and Florida election results.
■ A federal appeals court ruling on gerrymandering in North Carolina casts that state’s November election—and maybe control of Congress—into question.

‘Haiti is a shithole and it’s run by blacks.’ Republicans’ replacement candidate for the Illinois House retweeted that comment—from her husband. The Trib’s Kristen McQueary calls her selection “a fiasco.”
■ Trump friends and relatives posed, smiling, with a pastor who’s said LGBT marriage is the creation of Satan.
■ Some prominent Republicans are backing away from fundraising ties to a conspiracy-obsessed far-right website.

‘Catholic leaders have stood above the people and the law for far too long.’ In an opinion piece for the Sun-Times, Illinois Attorney General Lisa Madigan—a “a mother raising her children in the Catholic Church”—says the church “may have cleaned up, but it has never come clean” about its sexual abuse scandals.
■ She’s launching a hotline for people to report clergy abuse.
■ A Chicago priest has been benched after reports of misconduct involving a minor. 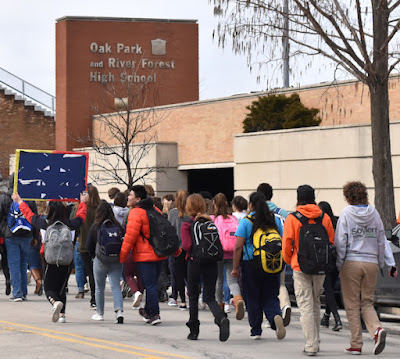 ‘The high school does not always come off well.’ But WBEZ’s Linda Lutton watched as Oak Park and River Forest High School screened the first episode of documentarian Steve James’ Starz series about race and equity in the school, America to Me, for an audience of hundreds. (Photo: Brian Crawford in the Chicago Public Square Flickr group.)
■ James and your Square publisher talk about the series onstage Sept. 11. Tickets here—just $10 after a $5 discount for you with the promo code SQUARE.