At WGN, dead air. A producer at WGN-TV yesterday tweeted criticism of the station’s likely new owner, the conservative Sinclair Broadcast Group, and its mandate that its anchors read a Donald Trump-aligned condemnation of “biased and false news.” But then—reportedly reprimanded—he declined further comment. One insider tells media watchdog Robert Feder, “We’ve all been told to keep quiet.”

■ A Sinclair-owned station in Madison, Wisconsin, refused to play along.
■ Jack Shafer in Politico: “By forcing this ham-fisted statement on their anchors … the chain has revealed its on-air employees as passive newsreaders who will read whatever crap is scripted for them.”
■ Ex-CBS News anchor Dan Rather on Facebook: “The vast majority of the journalists you see in this video want to be in an environment where they can do their jobs, reporting the news fairly, without favor or bias. They need our support.”
■ A Sinclair insider tells a Los Angeles Times reporter why Sinclair anchors have a hard time saying no.
■ Even Fox News insiders question Sinclair’s approach.
■ From Chicago Public Square in October: How to file comments with the FCC on Sinclair’s acquisition of Tribune Media stations, including WGN.

‘There could be additional deaths coming.’ After two deaths and dozens of cases of severe bleeding tied to synthetic pot laced with rat poison, Illinois public health organizations are on watch for more.
■ An influential state senator is pushing a plan to give people who have been prescribed opioids the chance to use medical cannabis instead.
■ Under Trump administration policy changes, the main Illinois bank serving the state’s marijuana industry is pulling out—forcing some operators to go cash-only.

Outgunned. A Chicago suburb is giving owners of assault weapons until June 13 to move them out of town.
■ In shooting massacre-scarred Parkland, Florida, students are now required to wear see-through backpacks—and sacrifice some of their privacy.

Like getting through security isn’t already a gamble. Mayoral candidate and fired police superintendent Garry McCarthy says he wants a casino on the far side of O’Hare International Airport security checkpoints.
■ Ex-schools CEO Paul Vallas has formally filed to run for mayor.
■ A Tribune editorial: This could be Rahm Emanuel’s toughest election yet. 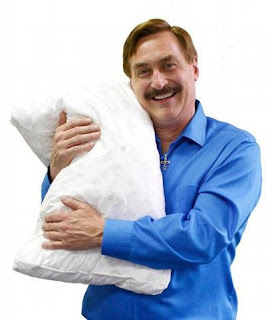 A soft touch. The legally embattled founder of the MyPillow company has been cozying up to President Trump.
■ Mother Jones: The head of the Consumer Financial Protection Bureau is asking Congress to gut the agency.
■ The Center for Investigative Reporting: In drafts of a long-awaited report on sea level rise and storm surge, National Park Service officials have deleted every mention of humans’ role in causing climate change.
■ Politico: Across the country, a record crop of women running for office are rewriting traditional campaign scripts.

Teachers’ red-state revolt. Updating coverage: In Oklahoma, one of several Republican-controlled states where teachers have been pressing for higher pay and more education funding, many schools have been closed for the second day of a walkout.
■ A Chicago Park District pension reform plan has been struck down by a Cook County judge—and taxpayers may be stuck with the bill.

Announcements.
■ Yesterday’s Chicago Public Square—and the CNN article to which it linked—misspelled the name of the Doogie Howser, M.D. TV show. Now fixed on both websites, thanks to the ever-vigilant Mike Braden.
■ Several readers questioned the phrase “Ex-Secretary of State Tillerson has been … disappeared.” Not a typo. The connotation—as explained by the Grammarphobia website—was deliberate: “This sense of the verb—to ‘disappear’ someone—surfaced in news reports about the Argentine military government’s … suppression of dissidents in the 1970s.”
■ Be first to email Squerror@ChicagoPublicSquare.com about an error and see your name here.

■ The Public Square Newscast pilot continues—now available via iTunes, RSS feed for your favorite podcast app, and just on the plain ol’ web. Take 2 minutes to listen and holler to Sound@ChicagoPublicSquare.com with feedback. It’s still an experiment, but your support can make it happen more often.