TRUMP’S TORTURE TENSION. In his first news conference as president, Donald Trump says he considers torture an effective tool against terrorism, but he says his defense secretary’s against it and “will override.”

■ A guy likely to be a Trump national security adviser pleaded guilty to bringing a gun to an airport.

■ A Trump staffer who shared racist posts online is in line for Education Department job.

IT LOOKS LIKE IT’S FROM TRUMP. IT’S SIGNED BY TRUMP. But an email note this week asking the president’s campaign followers to take a “First 100 Days Survey“ comes from the Republican National Committee. And it’s not much of a survey. As Jezebel’s Ellie Shechet noted of a similar campaign in November, “you cannot signal that you are against any of Trump’s proposals.”
■ Want to monitor the president’s Twitter feed without following him? The stupidly simple and free service IFTTT (If This Then That) — programming for non-programmers — can send you an email each time he (or anyone else) tweets. And much more.
■ How much time does Trump spend watching TV? 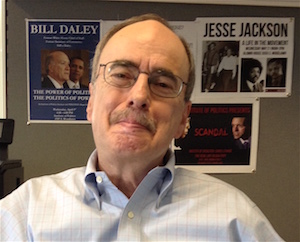 SIMON SAYS ... Veteran Washington political columnist Roger Simon is retiring from journalism at the end of January, ending a career that began at the University of Illinois.
■ Three years ago, Simon talked to me about his career and the disease that almost took his life.

LAND RUSH. Tuesday’s the deadline for residents to take the City of Chicago up on an offer to buy empty lots of land on their blocks for just $1 (plus $56 in closing costs).
■ Chicago’s booming Fulton Market district — already pegged for McDonald’s new home — is sucking up vacuum maker Dyson’s U.S. headquarters.
■ West Loop welcomes new indoor skate park.

‘WE HAVE AROUND 10 PEOPLE SPENDING A TRULY HORRIFYING AMOUNT OF TIME WORKING TO PULL THIS OFF.’ Offhand comments on social media have spiraled into real plans for a D.C March on Science.
■ Vice President Pence to Friday’s anti-abortion “March for Life”: “Life is winning again in America.”

WELLS FAR-GONE. Remember that website the U.S. Labor Department created to help Wells Fargo workers file whistleblower retaliation and other complaints after the bank was embroiled in scandal? It disappeared after Trump became president.
■ Behind closed doors in 2011, Federal Reserve bankers laughingly blamed unemployment on the unemployed.