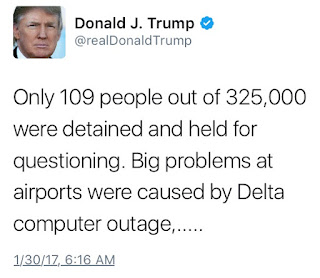 TRUMP BLAMES ... That chaos at airports? The president tweets it’s the result of a “Delta computer outage, protesters and the tears of Senator Schumer.”
■ A Lebanese man says agents at O’Hare asked him “Do you love your country?”
■ Iran-born BBC journalist detained at O’Hare: “They never used the word detained, so I wasn’t under any kind of arrest.”
■ Lawyers swarm O’Hare.
■ Trump’s executive order, annotated.
■ Chicago Tribune editorial: “Perhaps the order’s most offensive component is its inclusion of a de facto religious test.”
■ Columnist Laura Washington: This is Rahm Emanuel’s chance to “evolve from Mayor 1 Percent to Mayor Defender.”
■ Canada’s prime minister responds to the fatal shooting attack on a Quebec city mosque: “Muslim-Canadians are an important part of our national fabric.”

■ GrubHub’s CEO has deleted his Twitter account after enraging Trump supporters.
■ Keith Olbermann for GQ: How the media should be covering Trump.
■ Samantha Bee to host “Not the White House Correspondents’ Dinner.”

FRANGO SALE. Macy’s is selling the iconic chocolate brand long associated with Marshall Field’s to the parent company of Garrett Popcorn Shops.
■ A robotic barista at a San Francisco coffee shop can serve 120 drinks an hour.

‘THE ONLY CLASS OF CITIZEN ... WHO IS GOING TO LOSE THEIR JOB FOR SEEKING MENTAL HEALTH CARE.’ A psychologist who treats cops talks about a suicide rate among Chicago police 60 percent higher than those of other departments across the country.

GRIDLOCK’S PRICE. Illinois’ comptroller says interest alone on the bills that’ve gone unpaid as the state’s record-breaking stretch without a budget could hit $700 million.
■ Gov. Rauner’s one of three Republican governors hanging with billionaire brothers Charles and David Koch at conservative summit.
■ From three years ago, my interview with Christopher Kennedy, often cited as a potential challenger to Rauner.

NOT SO HIDDEN. Big winners at the SAG Awards Sunday night: “Hidden Figures” and “Stranger Things.”And political speeches.
■ “Stranger Things” star’s acceptance speech: “We will shelter freaks and outcasts, those who have no home.”

PANDORA + SPOTIFY = PANDIFY. Ever wish you could hear the songs you liked on Pandora play through Spotify? Check out the free Pandify service. It can generate a list of songs you’ve liked on Pandora that are also available on Spotify. You can copy and paste that list into Spotify to create a “Pandora” playlist on Spotify. Here’s mine. Please don’t laugh.

SQUARE MAILBOX. Shortly after the existence of this site went public on WGN Radio Friday night, a terse bit of, for lack of a better phrase, fan mail arrived from reader Elizabeth Austin — bearing just the subject line “amount of time, not about of time.” And so Friday’s edition of Public Square’s been fixed accordingly. If you have a correction or suggestion, send it to tips@chicagopublicsquare.com and you, too, may find your name in this space.