‘The most amazing tip.’ ProPublica Illinois’ Jodi Cohen reveals how she broke the story about parents transferring guardianship of their kids to win University of Illinois financial aid they wouldn’t otherwise merit.

■ A legislative hearing next week will “demand answers” about how to close the legal loophole that let it happen. (Photo: Beyond My Ken.)
■ Guess what the marijuana companies that get first shot at Illinois’ recreational market have in common?

‘A deeply broken process.’ An internal memo concedes the revelation that kids have been sleeping in Illinois Department of Children and Family Services administrative offices may represent just “the tip of a very large iceberg.”
■ The Trib says a cop advising DCFS of suspected child neglect was told to leave a message and wait up to four days for a callback.

Dogs gone. You won’t see security guards patrolling the CTA with dogs anymore, the Tribune reports, because of questions about the guards’ training.
■ Two years after revelation of a racist, sexist and homophobic culture in Chicago’s Water Department, ex-employees say it’s not over.

Film fest. Gov. Pritzker has signed an extension of a law granting tax credits to TV and movie productions in Illinois—even as an extortion scandal casts a shadow over the business here.
■ The governor suggested Illinois can lure production business from Georgia, which some in Hollywood are boycotting to protest that state’s restrictive abortion laws.

‘Fighting is inherently part of the process.’ The Beachwood Reporter’s Steve Rhodes has no patience for media pundits complaining “with supreme arrogance” that Democrats are arguing among themselves instead of targeting President Trump.
■ The Trib’s Eric Zorn reviews the Democratic debates so far: “The host network that will win my heart will be the one that decides not to waste time with show-biz introductions, ostentatious performances of the national anthem, tedious opening statements and other forms of ground pawing.”

Racist Reagan. New evidence that Ronald Reagan was a bigot shouldn’t be a surprise to anyone who was paying attention. 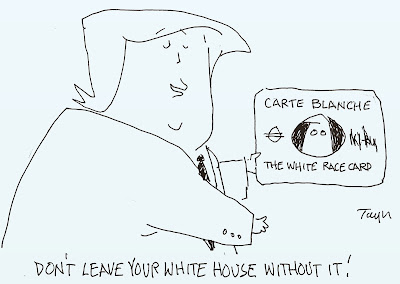 ■ Trevor Noah on The Daily Show: “It also means Donald Trump is a lot more presidential than we thought.” (Cartoon: Keith J. Taylor.)
■ Trump’s apparently sarcastic response to news that the home of his congressional critic, Elijah Cummings, was broken into: “Too bad!”
■ One supporter at a Trump rally in Cincinnati: “We’re all tired of being called racists.”
■ The only black Republican in the U.S. House is hanging it up calling it quits.

Ugly is as ugly types. A couple of Illinois designers have created a font made from the shapes of grotesquely gerrymandered congressional districts. 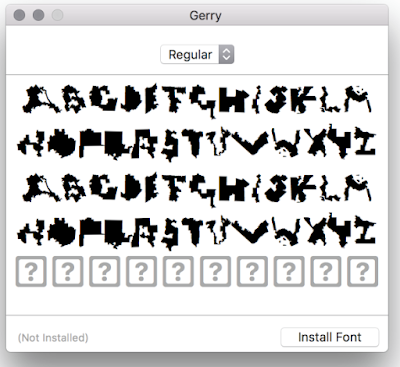 ■ A Tribune editorial: “Voters in Colorado, Michigan, Missouri and Utah approved constitutional amendments designed to prevent partisan gerrymandering. Illinois could do the same.”

Equifakeout. The FTC says the overwhelming response to Equifax’s settlement offer in that massive data breach means, um, yeah, no, you probably won’t get anywhere near the estimated $125-per-victim settlement.
■ Forbes: “Everyone’s Social Security Number Has Been Compromised. Here’s How To Protect Yourself.”
■ Prosecutors say a theft ring involving Amazon delivery drivers in Amazon’s home state stole and resold millions of dollars’ worth of Amazon stuff.

What’s the buzz? Chicago’s been named one of the 10 worst—or is it best?—American cities for biting insects that spread disease …
■ … maybe incentive to watch Lollapalooza on the web instead of being there.

So ends another Chicago Public Square pledge drive. This concludes another alphabetical round of thank-yous to The Legion of Chicago Public Squarians—including Ted Cox, Teresa Powell, The Skubish Family, Theresa Jabaley, Thom Clark, Tim Colburn, Tim Spencer, Tom Barnes, Tom Marker, Tom O’Malley, Wendy Greenhouse, Werner Huget and William Wheelhouse. But wait: If you join them in supporting Square by midnight Sunday, you can see your name in Monday’s edition—regardless of the letter with which your name begins. Is such acclaim not worth a paltry $5?

Thanks also to friend of Square Chris Koenig for some great link suggestions, and to Pam Spiegel for noting an inadvertently tasteless turn of phrase above.