‘Transformative.’ The Chicagoland Chamber of Commerce is lining up to support plans for a massive redevelopment project near Soldier Field. (Rendering: Landmark Development.) 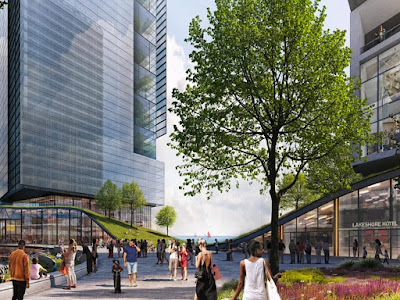 $10 million for the South Side or West Side. Billionaire and former Commerce Secretary Penny Pritzker’s foundation is offering big cash—a new “Chicago Prize”— for a single real estate project or other community investment that will “achieve the vision these communities have for themselves so they can help more families thrive.”
■ A new analysis warns of record flooding for Gurnee as a consequence of Wisconsin’s Foxconn factory development.

‘An amazing victory.’ A lawyer hails a judge’s order finding a suburban hospital’s new owners in contempt—and requiring them to abort their efforts to close the place.
■ After a string of mishaps, U.S. Rep. Dan Lipinski wants Metra to take control of Union Station away from Amtrak.
■ Lipinski faces a renewed primary challenge for his seat from Democrat Marie Newman—who says the rematch will be different.

Sic semper contemptibles. A bus company accused of mocking Chinese students traveling to and from the University of Illinois at Urbana-Champaign has agreed to a $100,000 settlement, refunds and stepped-up oversight by the state …
■ … but it’s still behaving repugnantly. 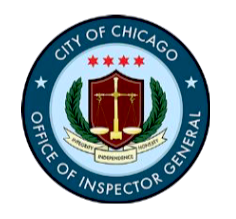 Nice work if you can get it—until you’re caught. The latest Chicago inspector general roundup of municipal misdeeds includes the tale of city workers who abused family medical leave to take Caribbean cruises.
■ Read the full report in a PDF.

As Mueller Thursday nears … Washington Post columnist Margaret Sullivan cautions not to count on the media for “a nuanced, accurate job … helping citizens understand the redacted version” of the Mueller report on President Trump’s campaign and Russian interference in the 2016 election.
■ Journalist Dan Gillmor: “The adjective ‘redacted’ is a bureaucratic word. … Would suggest ‘administration-censored.’”
■ NBC trolled Trump, The Onion-style, with this headline: “Fox News viewer shocked by Bernie Sanders’ town hall” …
■ … which became the most-watched candidate event of the presidential campaign so far …
■ … and whose ratings success is prompting other Democrats to consider visiting Fox.

The Time 100. The magazine’s 2019 list of the world’s “most influential people,” published early today, includes Chicago architect Jeanne Gang …
■ … who told your Chicago Public Square publisher on WBEZ in 2013—among other things—what she’d do if she could make over Detroit.
■ Chicago-based Kartemquin Films has won a couple of Peabody Awards—one for its documentary Minding the Gap, about Rockford skateboarders; the other for its overall body of “unflinching documentary filmmaking” …
■ … including the classic Hoop Dreams and the documentary series America to Me—whose director, Steve James, joined Square for a podcast last fall.

Ribfest exit? Organizers of Naperville’s celebrated summer pigout are planning to move it to Romeoville next year.
■ Naperville’s Christkindlmarket is history, too.

‘Black Friday’ for pot. As Illinois’ marijuana industry rises, the Tribune’s Ally Marotti previews a Chicago street festival “unlike any other” on Saturday, April 20—or, as aficionados know it, 4/20 …
■ … which also marks the 20th anniversary of the mass shooting at Colorado’s Columbine High School …
■ … as (updating coverage) police hunt a young Columbine-“infatuated” Florida woman who reportedly flew to Denver and bought a gun.
■ New research finds no evidence that hundreds of millions of dollars spent nationwide on protecting students from gun violence has made any difference.

Time’s running out on this. Friday’s the deadline: 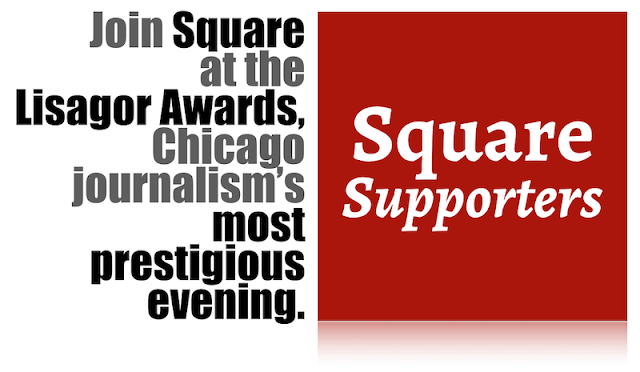