Don’t call it ‘impeachment.’ The Tribune’s Rex Huppke offers a way forward for Democrats conflicted about whether to put Donald Trump on trial: “Re-brand impeachment. … Don’t say he might be ‘removed from office,’ just tell him his greatness has proved too much for the structural integrity of the White House.”
■ A law professor who worked on the Trump transition team writes for The Atlantic: It’s time for impeachment. 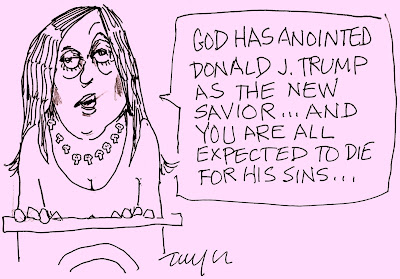 ■ The New York Times’ David Leonhardt: “I’ve been skeptical of the case for impeachment. … But I’ll also admit to being mildly uncomfortable with my own opinion on this subject.” (Cartoon: Keith Taylor.)
■ Elizabeth Warren in one of CNN’s “town hall” sessions with five presidential candidates last night: “If any other human being in this country had done what’s documented in the Mueller report, they would be arrested and put in jail.”

■ Vox picks winners and losers in the CNN marathon.
■ Candidate Kamala Harris: “I will give the United States Congress 100 days to … have the courage to pass reasonable gun safety laws. And if they fail to do it, then I will take executive action.”
■ Candidate Pete Buttigieg has fundraisers in Chicago and Evanston today.
■ The president began his day ranting on Twitter, demanding The New York Times “get down on their knees and beg for forgiveness.”
■ In a letter to Mayor-elect Lori Lightfoot, Blackhawks owner Rocky Wirtz slaps Mayor Emanuel for warring with Trump: “Stop the rhetoric on national and international issues and focus on Chicago.”

Brotherly blowback. The siblings originally arrested as suspects in the apparently concocted hate crime reported by actor Jussie Smollett are suing two of his lawyers, contending Smollett “directed every aspect of the attack, including the location and the noose.”
■ Meanwhile, Cook County State’s Attorney Kim Foxx has recused herself from the battery prosecution of a guy who appeared at a rally in support of her handling of the Smollett case.

‘The only other option I can think of is to just shut down the Red Line for the summer.’ The Trib’s Dahleen Glanton suggests Chicago find better ways to deal with “black kids … coming downtown” on warm nights: “Welcome them with open arms the way we do the Lollapalooza kids by deploying police officers solely to keep them out of harm’s way rather than assume [they’ve] come to cause harm.”
■ One young man tells ABC7: “Sometimes we get away and come down here because it is peaceful.”

Not enough state cops? The Trib documents a move to rebuild the Illinois State Police force—whose roster has fallen 20 percent over 20 years.
■ A federal appeals court says cops who chalk vehicles’ tires to enforce parking rules are violating the Constitution.
■ Reviewing his first 100 days, Gov. Pritzker tells Politico his biggest surprise has been the frequency with which he’s found himself consoling families of the dead …
■ … and he’s sticking by his call to impeach Trump.
■ PolitiFact rates Mostly False a Pritzker-backed organization’s claim that “in almost every state with an income tax, wealthy people pay a higher tax rate than the middle class.”
■ New legislation could give Illinois power to cap price hikes for insurance sold through the Affordable Care Act exchange. 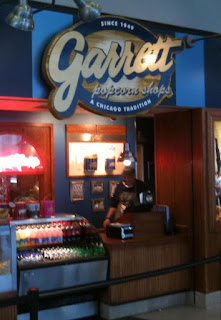 ■ After half a century, Stanley’s Market closed abruptly yesterday—giving away food to customers.
■ Sears is closing its Oakbrook Center store after close to 60 years.

Alderdo’s and alderdon’ts. Chicago City Council members have new Board of Ethics rules for how they should and shouldn’t use social media.
■ Illinois state lawmakers are considering requiring companies let consumers know when smart devices are listening.
■ On CNN last night, Elizabeth Warren made a clear case for breaking up Amazon and other big-tech companies.
■ Have you bought any ebooks from Microsoft’s store? They’re about to disappear forever—demonstrating what journalist and author Cory Doctorow portrays as the problem with “digital rights management” of media: “If the publishing industry deliberately set out to destroy any sense of intrinsic, civilization-supporting value in literary works, they could not have done a better job.”
■ In a Chicago Public Square podcast, Doctorow explains why he makes his digital books available free.

Jeopardy! tips. Naperville native James Holzhauer, who’s nearing $1 million in earnings on the show, has been using a strategy known as “the Forrest Bounce.”
■ The Trib tallies which Chicago-based TV shows will live and which will die at the end of the season.
■ Coming to CBS next week: An eight-episode Chicago-based dramatic series focused on police misconduct, political corruption and criminal justice reform.
■ Tonight on PBS: The documentary Boss: The Black Experience in Business spans 150 years of history in Chicago and elsewhere.