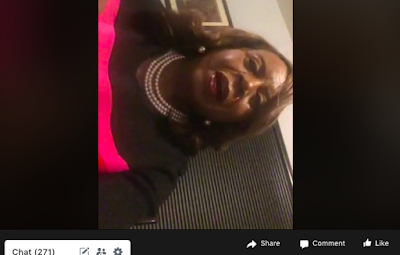 Boss calling? An Illinois law new as of yesterday requires companies to reimburse workers for “necessary expenditures incurred … related to services performed for the employer”—and that may include your use of a personal cell phone or computer for company biz (second item).
■ Another new law requires the state’s public colleges and universities to offer black history courses.
■ The University of Illinois at Chicago is launching a massive 10-year overhaul plan.

First shot. A 12-year-old boy was Chicago’s first reported shooting victim of 2019.
■ A Chicago cop committed suicide at his home yesterday—at least the department’s fourth such case since mid-2018. 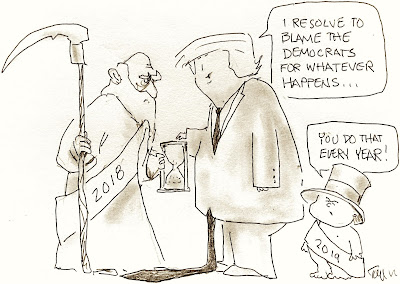 Trump vs. Romney. The president this morning sniped at Sen.-elect Mitt Romney after Romney’s New Year’s Day essay for The Washington Post condemned Trump for “words and actions” that have caused “dismay around the world.”
■ A Post editorial: “Trump’s shutdown has paralyzed immigration courts. Oh, the irony.”
■ The federal shutdown is leaving federal parks trashed.
■ Presidential might-be Elizabeth Warren is donating her congressional salary during the government shutdown to a nonprofit that helps refugees.
■ Axios: Democrats’ 2020 presidential dance is about to speed up—a lot.
■ Mother Jones: “Which Investigations Will the Dems Launch First?”
■ They’re already upending House rules.
■ Updating coverage: Trump and top Democrats meet at the White House. (Cartoon: Keith Taylor.)

Tree recycling. What to do with your decaying Christmas trees in Chicago.
■ The Atlantic says Washington State’s governor is running for the White House on “one priority: global warming … the mega-storms and fires causing millions in damages, the weather changes that will cause mass migrations, the droughts that will devastate farmers in America and around the world.”

‘Every artist whose work appears on Netflix should be outraged.’ Human Rights Watch is condemning Netflix’s decision to yank an episode of ex-Daily Show correspondent Hasan Minhaj’s show from Saudi customers’ playlists after complaints from Saudi Arabia’s government.
■ Entertainment Weekly previews tonight’s debut of Fox’s new TV series, The Masked Singer: “What the holy hell is this?”

‘Yes! We Have No Bananas.’ That classic song—along with Cecil B. DeMille’s original The Ten Commandments, Robert Frost’s poem “Stopping by Woods on a Snowy Evening” and all works first published in the U.S. in 1923 —is now in the public domain under the historic thawing of a 20-year copyright freeze …
■ … but, Ars Technica explains, that doesn’t mean everyone soon will be able to use Mickey Mouse, Superman and Batman however they wish.

Corrections and clarifications.
■ Going waaay back to the Dec. 18 edition of Square, which cited a New York Times report on Facebook’s privacy holes, Slate’s Will Oremus provides another take: He says the Times didn’t quite prove what a lot of people thought it proved.
■ Reader Mike Braden spotted two errors in the Dec. 20 Square: A subject-verb disagreement and the redundant phrase police and cops.
■ And Chicago Public Squarian Janean Bowersmith noted names out of alphabetical order on the Squarian roll-call page—which now, by the way, additionally features the names of readers who sign up at a new pledge level: Devotee. 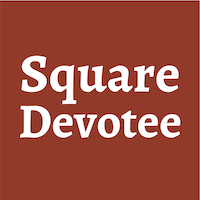