‘Impeach Donald Trump.’ The Atlantic’s cover story makes a detailed case that Congress should not wait to put the president on trial for “an attack on the very foundations of America’s constitutional democracy.”
■ Fake news, for real: Imposter versions of The Washington Post hit the streets of D.C.—and the internet—yesterday, proclaiming Trump had resigned as “Celebrations break out worldwide.” 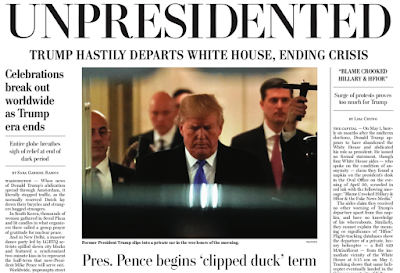 ■ The hoaxsters behind it say the fake paper—also available in a PDF version—serves up a “road map to creating the near future we want and need.”
■ The Intercept’s podcast Deconstructed interviews U.S. Rep. Rashida (“Impeach the motherf__ker”) Tlaib.

‘Give Trump his wall.’ The Tribune’s Rex Huppke says Congress should surrender and build the president’s border barrier as “a monument to American stupidity.”
■ In Illinois, the budget standoff means almost 1,200 hearings for immigrants awaiting their day in court have been canceled, buying at least some of them more time …
■ … and it’s hurting blind vendors who work on federal property in Illinois.
■ The Post: “The North Pole is moving, and the shutdown means we aren’t keeping up.”
■ The Daily Beast: Hardly any Democrat from a district Trump won has heard from him in weeks. 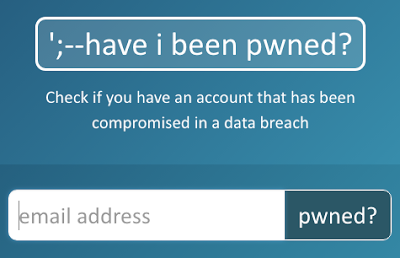 Kiss your password goodbye. Discovery of the largest collection of breached email addresses and passwords in the history of the internet means your favorites are probably may be compromised, so …
■ 1. Check to see if your email address is on the list, and …
■ 2. Check to see if your password has ever appeared in a breach.
■ 3. If it has, find a new one. (Farewell, *******123, you faithful old Gmail password, you.)
■ A security flaw in the online game Fortnight Fortnite exposed players’ accounts—allowing some of them to be recorded secretly.
■ In an excerpt from his forthcoming book Zucked: Waking Up to the Facebook Catastrophe, an early investor in the company says “The harm to public health, democracy, privacy and competition caused by Facebook and other platforms results from their business models, which must be changed.”
■ Apple’s CEO: “You Deserve Privacy Online. Here’s How You Could Actually Get It.”
■ Deadspin salutes departed Vanguard founder John Bogle, a “Real Motherf__king Hero of the People … who has kept hundreds of billions of dollars out of the pockets of Wall Street greedheads.” (Clarifying: A 2016 essay.)

‘Oh hell, I’ll do capsules.’ The Beachwood Reporter’s Steve Rhodes delivers one of the best summaries of the second Chicago Tribune editorial board forum with candidates for Chicago mayor.
■ The Trib series wraps up—live on Facebook—at 1 p.m. today.
■ Hundreds turned out last night to hear five black candidates for mayor discuss education, housing, policing and the economy.
■ Cook County Clerk Dorothy Brown’s chance of making the mayoral ballot is looking like a stretch.
■ Early voting for mayor could begin Jan. 28.

‘I’m not saying they’re part of an alleged crime with Burke. I am saying they supported the status quo.’ The Trib’s John Kass says some of the mayoral candidates “just can’t explain away the [scandalized Ald.] Ed Burke on their shoes.”
■ Ex-federal prosecutor Patrick M. Collins holds hope the Burke scandal can trigger a #metoo movement for Chicago corruption.
■ Chicago’s inspector general says on-duty Chicago cops served as chauffeurs and babysitters for a supervisor’s child.

Ouch. A suburban man with a license to own and conceal his gun faces a misdemeanor charge after accidentally shooting himself in the leg at an Outback Steakhouse.
■ Gov. Pritzker was set today to sign a bill requiring firearm dealers be licensed by Illinois State Police.
■ Applying for a job with the State of Illinois? It can’t ask for your salary history anymore.

Meat menace. An international commission says humanity can improve nutrition worldwide and head off global environmental catastrophe by cutting red meat consumption by (in North America) 84 percent.
■ RXBar is recalling many of its protein bars because they may contain unlabeled peanuts.

If you’re reading Chicago Public Square for free each day, great. If you’d like to help ensure it keeps coming—this thing takes real time and money to prepare and deliver—your support in the form of a few cents per issue is always welcome.

Thanks … to The Chicago Moms blog for ranking Chicago Public Square among “Chicago-based podcasts … ready to help fight mommy brain.” Hear here.
■ … to Aaron Barnhart, who noted a misspelling above of the name of the game Fortnite.
… and to Sharon Rosenblum, who noted the age of the Deadspin item linked above.